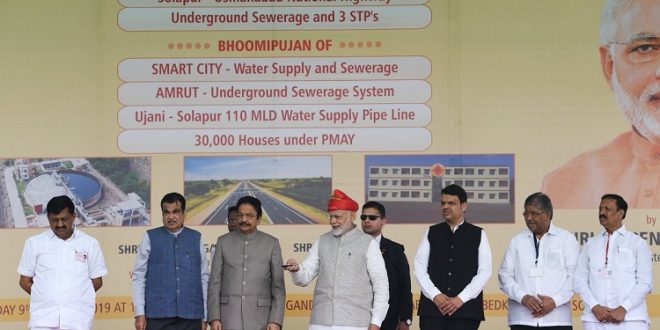 PM Modi says govt is striving to ensure life of dignity to every poor person, irrespective of caste or creed

Prime Minister Narendra Modi has said, it is his government’s endeavour to ensure that every poor person, irrespective of caste or creed gets to lead a life of dignity, and gets access to all possible opportunities. Addressing a gathering at Solapur in Maharashtra today, he said, the Centre is committed to the principle of ‘Sabka Saath, Sabka Vikas.’

Referring to the passage of the Constitution Bill to provide 10 percent quota in job and education for economically weaker sections in general category, in the Lok Sabha, PM Modi described it as a landmark moment in the nation’s history. He said, it sets into motion the process to achieve an effective measure that ensures justice for all sections of society.

Speaking on  Citizenship Act Amendment Bill the Prime Minister assured people from North East that their interests will also be protected. Mr. Modi said that he is confident that both the bills passed in Lok Sabha yesterday will be passed in Rajya Sabha today.

Prime Minister openly challenged the Congress to speak on relation of Christian Michel with Rafael deal. He said, Michel has accepted that he was not only dealing with Augusta Westland but was also interested in fighter plane deal. Mr. Modi alleged that Congress is making fake allegations against him. But, he said inspite of this he is protecting the interests of the Nation and will continue to do so in future also.

Earlier, Prime Minister launched road and underground sewerage system projects developed at a cost of  of 1,100 crore rupees in Solapur of Maharashtra.  At a public rally, Mr. Modi also laid the foundation stone for an over 1800 crore rupee housing project of 30,000 units under the Pradhan Mantri Awas Yojana. It will benefit the homeless poor like rag pickers, rickshaw pullers, textile and beedi workers.

PM Modi commissioned the four-laned over 98 km Solapur- Tuljapur-Osmanabad section on NH-52. The toll road project will improve connectivity between Solapur and the Marathwada region.

Nitin Gadkari in his speech appealed sugar producers to produce Ethanol directly from cane juice and assured that government will purchase it. Devendra Fadnavis appealed Prime Minister to release central assistance for drought-affected Maharashtra at the earliest.

Post Views: 9
2019-01-09
admin
Previous Over Rs. 1 Cr Worth Unaccounted Foreign Currency Seized At Hyderabad Airport
Next Army Chief General Bipin Rawat says terrorism is spreading like multi-headed monster as some nations continued to use it as state policy