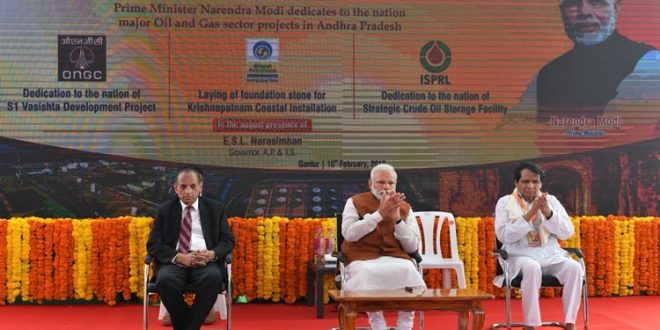 At Guntur in Andhra Pradesh, the Prime Minister dedicated to the nation the 1.33 million metric ton capacity Visakhapatnam Strategic Petroleum Reserve facility. He also inaugurated Oil and Natural Gas Corporation Limited’s Vashishta and S1 development project located in the Krishna-Godavari Offshore Basin. Foundation stone was also laid for setting up of a new terminal of BPCL at Krishnapatnam.

Addressing a gathering in Guntur, Mr Modi said the project is not only important for Andhra Pradesh but for the entire nation to meet its energy needs.  The Prime Minister said these projects will create huge job opportunities.

Slamming the Opposition, the Prime Minister said, parties which left the people to live in smoke, are now spreading smoke of lies. He also criticised Chief Minister and TDP supremo Chandrababu Naidu, saying he has made a U-turn on promises of development by not using central funds in an appropriate way.

At Tiruppur in Tamil Nadu, Mr Modi commissioned the 10-km stretch of the Chennai Metro rail through video-conferencing. The stretch connects DMS and Washermanpet and also completes the 45-km long Metro rail first phase in the state capital.

The Prime Minister laid the foundation stone for a 100-bedded ESIC hospital, besides inaugurating a 470-bedded modern ESIC hospital in Chennai. He also launched the modernisation and expansion works of Chennai and Trichy airport terminals.

The Bharat Petroleum and Chennai Petroleum, BCPL’s Ennore Coastal Terminal and the new crude oil pipeline from Chennai Port to its refinery at Manali in north Chennai were also commissioned by the Prime Minister.

Addressing a BJP rally at Tiruppur, Mr Modi termed creation of two defence corridors, one of which is in Tamil Nadu, as a path-breaking step. He said, the corridor in the state will bring industry and investment opportunities for the youth.

The Prime Minister made a scathing attack against Congress, saying the previous Government led by the party was not serious about the modernisation of the Defence Forces.

Mr Modi said, his government has been focusing on Defence modernisation and self-reliance.

The work for doubling of the Chikjajur-Mayakonda railway line was also inaugurated by the Prime Minister.

Speaking on the occasion, Mr Modi said, projects worth 5,000 crore rupees have been inaugurated which will give an impetus to the government’s vision of development for all.