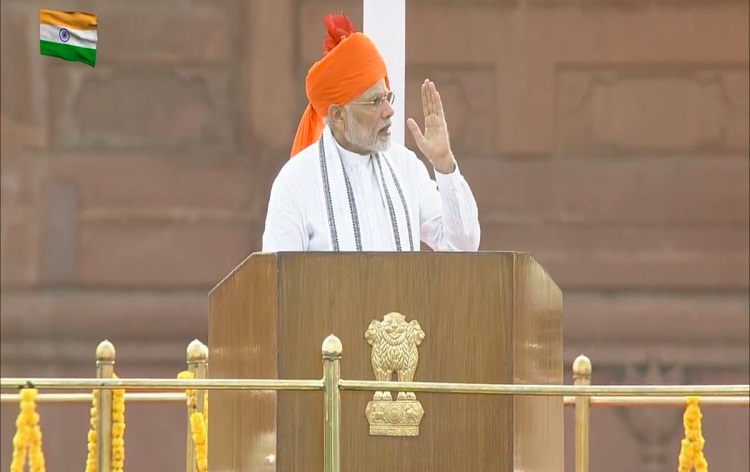 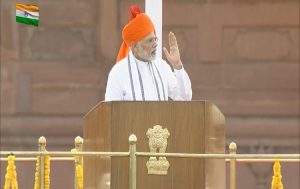 Announcing this from the ramparts of historic Red Fort after unfurling the tricolour on the occasion of 72nd Independence Day, Mr Modi said, it is high time to ensure that the poor gets access to good quality and affordable health care.

The healthcare initiative will have a positive impact on 50 crore Indians under Ayushman Bharat. The Prime Minister informed that the government has decided to provide five lakh rupees health care insurance cover for the poor and vulnerable under the programme and in future it can be extended to the low middle class. Mr Modi said, it is essential to ensure that poor people are free from the clutches of poverty due to which they cannot afford healthcare.
The Prime Minister said, India is proud of its scientists, who are excelling in their research and are at the forefront of innovation.

Amid applause from people present at the Red Fort, Prime Minister said, India will send a manned mission Gaganyaan and become the fourth country to send a human being into space.

Mr Modi said, Indian astronaut, be it son or daughter, will go into space in Gaganyaan by the year 2022.

Mr Modi also announced that women officers commissioned in short service in the Armed Forces will get the opportunity for permanent commission like their male counterparts.
On women safety, Mr Modi said, there is a need to free the society and country from this disgusting mentality of rape.

The Prime Minister also called for giving wide publicity to the cases in which rapists were awarded the death sentence, saying it would instill fear in people with demonic mindset. He said, the society needs to feel a million times more pain a rape victim endures.

He spoke about fast-track trial of rape cases in Madhya Pradesh and Rajasthan where the convicts were condemned to death within days. Mr Modi said, the rule of law is supreme for us and there can be no compromise with this.
On Triple Talaq, Mr Modi said, the government is trying to end the practice but there are some people who do not want it to end. He said, the practice of Triple Talaq has caused great injustice to Muslim women and the Government will ensure that justice is done.
Prime Minister Modi said there is a need to ensure social justice for all and create an India that is progressing rapidly. Mr Modi said, the recently concluded Parliament session was devoted to social justice with measures being taken to protect the interests of Dalits, deprived people, tribals, women and the backwards.
Mr Modi said, many parts of the nation witnessed a good monsoon but at the same time parts of India have been affected by floods. He said, his thoughts are with the families of those who lost their lives due to floods in various parts of India.

The Prime Minister said, the demand for higher MSP was pending for years. From farmers to political parties to agriculture experts, everybody was asking about it but nothing happened. He said, his Government took the decision on increasing MSP.
The Prime Minister said India will be the engine of growth for the world economy for the next three decades as the sleeping elephant has started to run on the back of structural reforms like GST.

He thanked the business community for the success of the GST and for making it a reality. Mr Modi said, from being seen as among the fragile five, India is now the land of reform, perform and transform. He said the government is poised for record economic growth.

The Prime Minister said, earlier it was red tape in India now it is red carpet. He said, India has become a multi-trillion dollar investment destination. The government has the power to take tough decisions because national interest is paramount for it.
Mr Modi said, AFSPA has been completely withdrawn from Tripura, Meghalaya and many parts of Arunachal Pradesh and the states are seeing historic peace. He said, from 126 districts, Left Wing Extremism is now restricted to 90 districts. He said, the government is working to ensure peace across the nation.
Turning to Jammu and Kashmir, Mr Modi said, former Prime Minister Atal Bihari Vajpayee had shown the path of Insaniyat, Kashmiryat and Jamhuriyat.

He said, government does not believe in bullet and abuse and all the problems of the State can be resolved by embracing people. The Prime Minister said, the Centre is committed to the development of all sectors and all the sections of Jammu and Kashmir.

He also said, preparations for the long-standing panchayat and local body elections are underway to further strengthen democracy in the State.
The Prime Minister said, the OROP demand was pending for decades, and the Government was able to take a decision in this regard as people of the country and brave army personnel had faith in the govenrment. He said the government will always take decisions in the interest of the nation.

Mr Modi said, the government is making efforts to fulfill the needs and aspirations of the people and both Centre and the state governments should work together in this direction.

He said, the country is proud of what it has achieved and at the same time, it also have to look at where it come from.

Mr Modi said, there was a time when Delhi was supposed to be too far for North East but today the government has brought Delhi to the doorsteps of North East.

Mr Modi said, with a ‘Beej Se Bazar Tak’ approach, the government is is bringing remarkable changes in the agriculture sector. The aim is to double the income of farmers by 2022. He said, due to Swachh Bharat mission, lakhs of children are leading healthier lives.
The Prime Minister said, the government will not spare the corrupt and those who have black money as they have ruined the nation. He said, Delhi’s streets are free from power brokers. He said, the honest taxpayers of the country have a major role in the progress of the nation.

It is due to them that so many people are fed, the lives of the poor are transformed. The Prime Minister said, in today’s India there is no place for nepotism. He said, the Centre has ensured that environmental clearances are done transparently.
Our correspondent reports that the unfurling of the tri-colour was synchronized with the 21 Gun Salute.

The National Flag Guard comprising 32 men and one officer each from the Army, Navy, Air Force and Delhi Police were present the Rashtriya Salute at the time of unfurling of the National Flag.

Seven hundred cadets of the National Cadet Corps drawn from 16 schools of the Delhi Directorate comprising the Army, Navy and Air Force wings participated in the flag hoisting ceremony this year.

The cadets took part in the singing of patriotic songs and the National Anthem along with the school children.

Three thousand 500 girls from 36 schools of Delhi Government sang the National Anthem and five thousand boys from 72 schools witnessed the event. On this occasion, these school children displayed the formation of ‘Bharat.

After concluding his speech, Mr Modi met children present at the Red Fort premises. The ceremony was concluded with the release of Tricolour ballons.
Earlier, he paid floral tributes to Father of the Nation Mahatma Gandhi at the Rajghat.