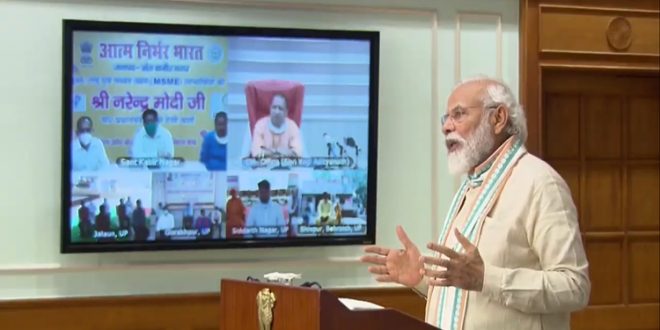 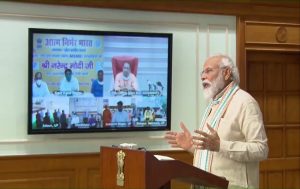 Prime Minister Narendra Modi today said that the fight against the Covid-19 epidemic is going on and since there is no Vaccine for Coronavirus, we only have one medicine for this virus and that is Mask and 2 gaz ki doori or social distancing. Launching the unique and path-breaking initiative scheme of Atma Nirbhar Uttar Pradesh Rojgar Yojana through video conferencing Prime Minister said that ATMANIRBHAR ABHIYAN is going to benefit Uttar Pradesh the most.

The Atma Nirbhar Uttar Pradesh Rojgar Yojana is focused on generating employment for those migrant workers of the state who recently returned from other states. Under the campaign around one crore 25 lakh people were provided employment in the state in different schemes.

On this occasion the Prime Minister heaped praise on the UP government and particularly the leadership of Yogi Adityanath for handling the migrant workers issues perfectly. The PM said that the Yogi Government has done a wonderful job and worked on war footing using all resources to contain the spread of Corona. Even Chief Minister Yogi Adityanath decided not to attend the last rites of his father and decided to work for the people of the state.

Mr. Modi said that Uttar Pradesh has shown exemplary success in controlling the spread of Corona and this success becomes more important when it is compared with 4 major countries of Europe whose total population is close to UP’s population and while those countries have more than one lakh deaths,  but the number is only 6 hundred in UP. The UP government has therefore saved more than 80 thousand lives if it is compared with the casualties in 4 countries of Europe.

The Prime Minister said that The ATMANIRBHAR BHARAT campaign will generate approximately 35 lakh new jobs in the agriculture sector. He  especially mentioned the efforts of the state government in dealing with the epidemic and termed it historic. He said that the state government has made arrangements of one lakh beds, constituted more than 60 thousand health teams, provided food and ration to the needy and stated various schemes for ATMANIRBHAR BHARAT.

On this occasion Mr Modi interacted with members of Self Help Groups and beneficiaries of different central and state government schemes. Under the Atma Nirbhar Uttar Pradesh Rojgar Yojana, a Loan amount of more than 10600 crores has been distributed to more than 4 Lakh units.  The campaign is launched in 31 districts of the state. These districts have more than 25,000 returnee migrant workers.