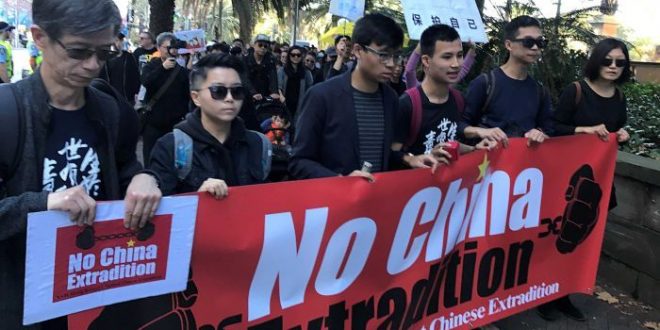 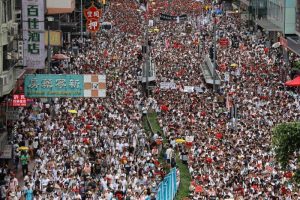 SYDNEY/PEKING: Hundreds of thousands of people have taken to Hong Kong’s streets in a final bid to block a proposed extradition law that would allow suspects to be sent to China to face trial, with police bracing for the biggest march in the city in 15 years.

The proposed legislation would allow the Hong Kong government to extradite suspected and fugitives on a case-by-case basis to countries where it does not currently have extradition treaties, including mainland China.

The move has reignited the democracy movement in the territory with lawyers, legislators, business 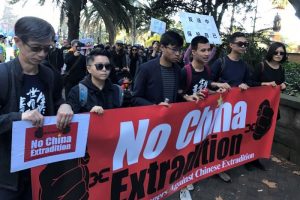 leaders and journalists among those marching today through the heart of Hong Kong.

The sweltering heat has not dampened the turnout on the streets of central Hong Kong which is expected to be the largest demonstration since the ‘Umbrella Movement’ in 2014, which brought the bustling city to a standstill.

Police chiefs have called for public restraint, government-funded broadcaster RTHK reported, as they mobilised more than 2,000 officers for a march that organisers expect to draw more than 500,000 people. 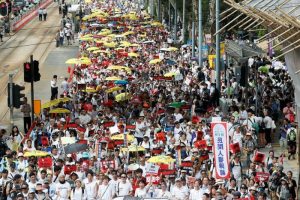 Protesters who arrived early have chanted “no China extradition, no evil law” while others have called for Hong Kong’s Chief Executive Carrie Lam to step down.

One protester held a sign reading “Carry off Carrie”.

The pro-democracy protesters are marching to the city’s legislative council where the bill at the heart of this uprising is set to be debated in the coming week.

The city’s main metro station has been closed in an attempt to stem the flow of people into the city.

Lawyers and human rights campaigners are among those who argue the laws would put basic human rights at risk and jeopardise a person’s right to a fair trial in countries which do not have the same rule of law as Hong Kong. 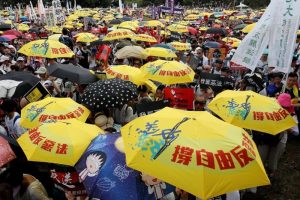 Hong Kong currently holds extradition treaties with 20 jurisdictions around the globe, including Australia.

They are also fearful China would use the legislation to extradite dissidents critical of the central government.

“It puts our legal system on a direct collision course with that of the mainland, when we in Hong Kong talk about the rule of law, traditional independence is a very, very important element”, former Hong Kong Bar association chairwoman and senior lawyer Audrey Eu said.

“But in the PRC (Peoples Republic of China), Xi Jinping, the president and also the head of the supreme people’s court have said expressly, judicial independence is a mistaken western concept.

Ms Eu said the legal professional would have little power to fight against an extradition request once the laws had passed and warned it could see foreigners living, working or transiting through Hong Kong also within reach of Chinese laws.

“The international community and the business sector are extremely worried about this law and once you lose confidence in Hong Kong then of course they will just move away their capital.”

Amendment will ‘take away the firewall’

When Hong Kong was transferred to China in 1997 under the “one country, two systems” deal, the territory was guaranteed a high degree of autonomy, allowing it to keep its own political, legal and economic systems until 2047. 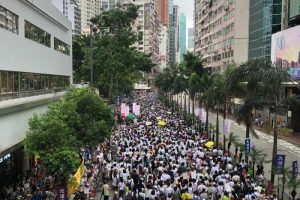 “The whole essence of one country two systems is you have two separate systems in particular the legal system,” she said.

But the government argues the laws are necessary to fight crime, including drug manufacturing and trafficking, money laundering and firearms smuggling.

In a rare public display of opposition, the city’s legal fraternity marched silently in protest on Thursday night while the normally conservative business community has also been critical.

The proposal has also attracted widespread criticism from all around the globe including the United States, Britain and Canada.

The territory’s last British governor Chris Patten has also entered the fray, labelling the proposal as an assault on Hong Kong’s values, stability and security.

20-year-old man, Chan Tong-Kai is at the centre of the firestorm around the bill.

Hong Kong’s pro-Beijing leader Carrie Lam proposed the legislation earlier this year after Taiwan requested his extradition to face charges of allegedly murdering his pregnant girlfriend while on holiday there.

In April, he was convicted by a Hong Kong court of money laundering — in relation to his girlfriend’s murder — but authorities were unable to charge him with murder in local courts.

With Chan’s release possible as early as October having already served time, the Hong Kong government is using the case to push for the extradition law amendment to pass by next month.

‘We’re outnumbered in the legislature’

The special administrative state’s parliament is made up of two main camps — the pro-democracy legislators and those loyal to the Chinese government, which hold the numbers in the Legislative Council.

The extradition law amendments are set to come before the Legislative Council on Wednesday for a second reading and to be debated.

When the bill comes to a vote before the mid-July break, the democratic members will not have the numbers to stop it passing.

Pro-democracy legislator Claudia Mao conceded the laws would pass but remained determined to demonstrate to the world China’s growing influence over the autonomous territory.

“We outnumbered in the legislature, not because we’re not popular but all because of this very twisted election system in Hong Kong — we have more votes, but we have fewer seats”, Ms Mao said.

“Fifty years from now I hope they would say they put up a heroic fight even if they didn’t make it, they showed to the rest of the world we didn’t just take things lying down.

“China’s definitely tightening up its grip ever since our Umbrella movement five years ago — that umbrella movement certainly has proved a big loss of face for Beijing — Beijing obviously see Hong Kong as some unruly teenager who just refuses to learn to be grateful and obedient.

“Come 2047 when the no change guarantee would expire – what’s going to happen to Hong Kong?”, she said.

A group of 1,000 protesters in Sydney have ruged the Australian government to condemn the proposed new law.

Accountant Ida Lee, one of who gathered in central Sydney, said she valued her freedom of speech, and that expatriates feared being seized by China as they travelled through Hong Kong.

Protest organiser Jared Fu, a university student, called on the Australian government to condemn the proposed law, as the United States, Canada and the European Union had done.

“Our major concerns regarding this bill include possible political persecution and human rights violations and even threats to personal safety if detained by China,” he said.

Australia’s government has not condemned the law but a Department of Foreign Affairs and Trade spokesperson told Reuters that its consul-general in Hong Kong had raised the issue with senior levels of the city’s government.