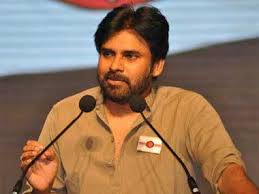 Pawan accuses Chandrababu of having double standards on SCS

Hyderabad, March.27 (PMI): Jana Sena chief Pawan Kalyan today accused TDP chief and Chief Minister N Chandrababu Naidu of having double standards for calling an all-party meet on Tuesday at the State Assembly over Special Category Status (SCS) issue to the State.
In a statement here on Tuesday, Pawan Kalyan said by conducting such a meeting, Chandrababu Naidu wants others to share his sins and asserted that the Jana Sena will never be part of such meetings which are of no significance. Pawan Kalyan went on to say that had Chandrababu really cared for SCS, he could have conducted an all-party meet long ago and the movement for SCS would have gained steam. “They have pulled out of the NDA recently and it will not give any results now and conducting all-party meeting now will not yield any fruitful result”, he said, adding that even Chandrababu Naidu was also aware of it.
Pawan said he received an invitation on Monday night for the meeting which was to be held on Tuesday. Initially, the meeting was promoted as an All-Community meeting and later it was decided to include all political parties. He said his party sees the meeting as a “political move of the TDP”.
“Jana Sena strongly believes that this all-party meeting is being held to impersonate the five crore people of Andhra Pradesh, who are in a deep state of agony”, he added. (PMI)
2018-03-27
admin
Previous Free cataract surgeries to people in 8 months: CM
Next Kishan demands explanation for resignation of AG Prakash Reddy