Hyderabad, Dec.25 (PMI): In the wake of the BJP government at the Centre coming up with NPR followed by nationwide protests against the CAA and NRC, AIMIM supremo Asaduddin Owaisi lambasted the former. Owaisi today called on Chief Minister K Chandrasekhar Rao at Pragathi Bhavan and sought his support against CAA and NRC and NPR.
Along with a team of United Muslim Action Committee leaders, the Hyderabad MP discussed with Chief Minister on the critical issues for about three hours.  Later, he told mediapersons that there was no difference between NRC and NPR, while the Centre denies it.
Owaisi said the Chief Minister would decide the issue in two days on his stance and TRS leaders are to attend a meeting in Nizamabad on December 27 on these issues, he said. Owaisi hoped of getting support from the Chief Minister against the NRC, CAA and NPR. He also said a meeting will be conducted with all political parties soon to build pressure on the Centre to scrap them.  Owaisi flayed Prime Minister Narendra Modi and Union Home Minister Amit Shah for denying relation between NRC and NPR. 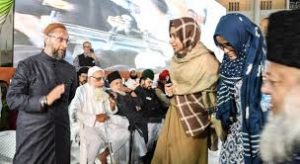 The Hyderabad MP said the Union cabinet has approved the NPR with funds to pave way for NRC.  He opined that it was not a religious problem as the NRC is for the nation and the Constitution. AP Chief Minister Y S Jagan Mohan Reddy announced that he was opposed to the NRC and CAA. Earlier,  Owaisi appealed to YCP Chief to oppose the CAA and NRC.
It may be mentioned here that both the TRS and YCP supported CAB in Parliament.