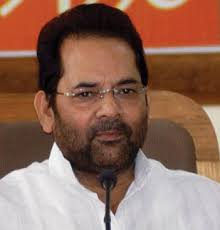 Government has Provided Scholarships to 3.20 Crore Students from Minorities which Include about 60 per cent Girls

Union Minister for Minority Affairs Shri Mukhtar Abbas Naqvi today said here that those people who follow the principle of “Jhuthmev Jayte” instead of “Satyamev Jayte” are trying to “hijack the truth and peace through malafide misinformation”.

While addressing “Minorities Day” programme organised by National Commission for Minorities in New Delhi today, Shri Naqvi said that those people who are trying to “hijack peace through rumour and malafide misinformation” should understand that they will fail in their conspiracy. “Satyamev Jayte” will demolish political propaganda of “Jhuthmev Jayte”.

Shri Naqvi said that there is no question mark or threat to citizenship of any Indian Muslim or any other citizen due to Citizenship Bill. Citizenship Amendment Bill is to provide citizenship and not to take away citizenship of any person. Minorities in India are an equal partner in development process. We have to defeat “Conspiracy to create Confusion” by those people who are mixing Citizenship Bill and NRC. We have to remain cautious of “Evils of Misinformation”. The process of NRC, started in 1951 in Assam, has not been completed yet. Those people who have not found place in the list, can appeal to tribunals and also courts. The Government is also helping such people.

Shri Naqvi said that the Citizenship Amendment Bill 2019 is the commitment to provide “Humanitarian Dignity” to “Inhuman Humiliation”. Gurudev Rabindranath Tagore had said that India is “Sea of Humanity”. “Vasudhaiva Kutumbakam” is our cultural commitment. India has always provided justice to those facing injustice and oppression.

Shri Naqvi said that besides the Indian Constitution; secularism and tolerance in the DNA of the majority community in India has ensured “safety, prosperity and dignity” of Minorities in the country. Secularism and tolerance is in the DNA of majority community in India. This is the strength of India’s “Unity in Diversity”, he added.

Shri Naqvi said that the Government has taken various steps for welfare and empowerment of the Minorities. During the last 5 years, more than 8 lakh people belonging to Minority communities have been provided employment and employment opportunities through employment oriented skill development schemes such as “Gharib Nawaz Employment Scheme”, “Seekho aur Kamao”, “Nai Manzil”, “Nai Raushni” etc. With the aim of educational empowerment of Minorities, the Government has provided different scholarships to 3.20 crore students which include about 60 per cent girls.

On the occasion, National Commission for Minorities Chairman Shri Ghayorul Hasan Rizvi, NCM Members, senior officials and other dignitaries were present on the occasion.

During the programme, Shri Naqvi also felicitated Ms Irmim Shamim, who has become the first Gujjar woman in Jammu and Kashmir’s Rajouri district to qualify for the medical studies at the prestigious All India Institute of Medical Sciences after she cleared the MBBS AIIMS entrance exam this year. Ms Irmim Shamim, who hails from Dhanore village in Rajouri district, worked hard beating all adversaries to make it to the premier institute.