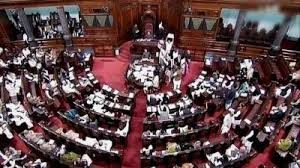 Opposition Congress forced repeated adjournments of the Rajya Sabha in its pre-lunch session today accusing the government of conducting raids by Income Tax authorities on their party MLAs from Gujarat, who are staying in a resort in Bengaluru.
As soon as the House met for the day, Leader of Opposition Ghulam Nabi Azad said his party MLAs have been kidnapped. He said a Congress minister in Karnataka, who is coordinating with the visiting MLAs in their stay, was raided and questioned. Mr Azad also alleged that the Government is misusing its power.
Finance Minister Arun Jaitley has refuted the Congress allegation saying that no searches were conducted by the Income Tax officials at the resort in Karnataka where the party MLAs from Gujarat are staying. Making a statement in the Lok Sabha, Mr Jaitley said, he himself verified form the IT Department and it was informed that no search was carried out against any MLAs of the Congress from Gujarat. He said, IT officials have visited the resort only to take the Karnataka Minister for recording his statement, against whom the searches are being conducted.
Mr Jaitley asserted that IT department raids in Karnataka has nothing to do with Gujarat election but it is about financial irregularities. Mr Jaitley said raids have been going on in 39 locations throughout the country. Earlier, soon after the Question Hour, Congress leader Mallikarjun Kharge charged the government of terrorising the people before the polls
Post Views: 181
Share
Previous I-T dept conducts searches at multiple locations related to Karnataka Energy Minister DK Shivakumar in tax evasion case
Next Mumbai: 45-year-old killed by co-worker for resisting sexual advances, accused caught