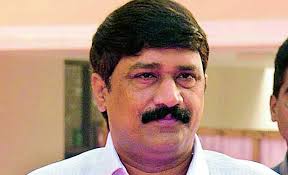 Visakhapatnam : A local court in Visakhapatnam issued a non-bailable warrant against A P minister Ganta Srinivas Rao in an election case.

Anakapalli 2nd additional civil court judge issued the warrant in connection with an election case registered in 2009. A case of violation of code of conduct in 2009 election was pending against Ganta Srinivas.

The case was adjourned to September 11.