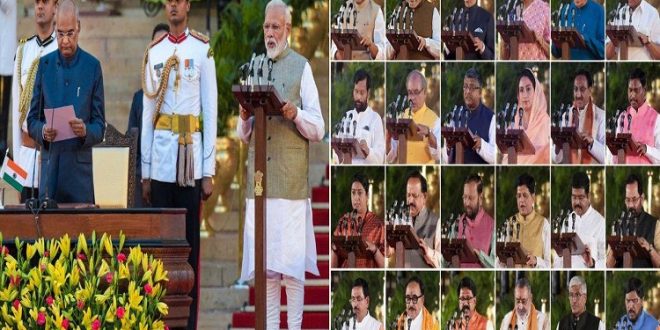 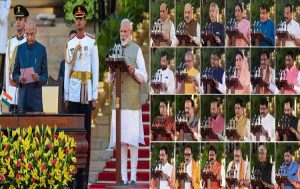 Earlier, Santosh Gangwar took the charge of Ministry of Labour and Employment.

Talking to media in New Delhi, Mr Gangwar said, he will work for the betterment of unorganised sector and ensure social security for those working in the this sector. Gajendra Singh Shekhawat has taken the charge of Jal Shakti Ministry. He said, water scarcity is the biggest challenge in the world now and keeping this challenge in mind, Prime Minister Narendra Modi has integrated all water related issues with Jal Shakti Ministry.

He said, only four per cent of total potable water of world is in India and government will ensure preservation of water for the country. Piyush Goyal has taken the charge of Commerce and Industry Ministry. Talking to media, Mr Goyal said, he is thankful to Prime Minister for reposing faith in him.

Newly sworn-in minister Shripad Naik today thanked Prime Minister Narendra Modi for selecting him as a member in the Union Council of Ministers for the second consecutive term. Mr Naik was retained as the minister of state (independent charge) for Ayush, a position he held in the previous NDA government, while being also allocated the responsibility of minister of state for defence on Friday.

Speaking to AIR, Mr Naik said that retaining the Ayush ministry would help him focus on related projects that were initiated in his previous term. Mr Naik was elected to the parliament from the North Goa Lok Sabha seat for the fifth straight term in the recent general elections.

Dr S. Jaishankar has taken over as the External Affairs Minister. Prakash Javadekar took the charge of Information and Broadcasting Ministry.

Talking to media, Mr Javadekar said, press freedom is essence of democracy. He said, the freedom of press was curtailed during the time of emergency and that was the black period for the media. Piyush Goyal has taken over as Minister of Railways.

Ram Vilas Pawan has taken over as Minister of Consumer Affairs, Food and Public Distribution. Mukhtar Abbas Naqvi assumes the office of Ministry of Minority Affairs. Dr. Jitendra Singh took charge as the Minister of State in the Prime Minister’s Office.

Prakash Javadekar took the charge of Information and Broadcasting Ministry.

He highlighted the important role being played by media in a democracy and reiterated the commitment of the government towards a free press.

He also talked about the importance of freedom of speech and expression which is an important part of the democratic ethos of the country.

Mr Javadekar said, the freedom of press was curtailed during the time of emergency and that was the black period for the media.

Dharmendra Pradhan today took charge of the Petroleum and Natural Gas Ministry. Talking to media in New Delhi, Mr Pradhan said, increasing domestic oil and gas production will be government priority. He said, the reforms of the last five years have started yielding results, and centre will be focussing more on them.

Mr Pradhan said, setting up of common infrastructure, market friendly infrastructure is on the top of the government’s agenda. He said, the Ministry has given emphasis on promoting bio-fuels and work is being done in this direction.

Talking to reporters, Mr Naqvi said that education, employment and empowerment will be his priority to ensure socio-economic-educational empowerment of minorities.

The Minister said, a nation-wide awareness campaign will be launched to reduce school dropout rate among minority especially muslim girls.