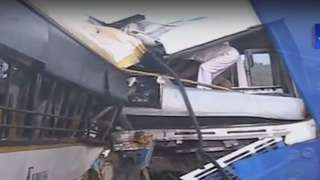 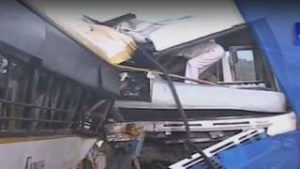 Nellore: Two APSRTC buses crashed into each near R&B Guest House in Udayagiri in Nellore district leaving the drivers of both the buses and few passengers critically injured on Tuesday morning.
The crash of the buses was so severe that the drivers got trapped in the badly damaged buses and they were pulled out only after an hour of efforts by the locals. At least 15 other passengers in both the buses also sustained serious injuries and all of them are undergoing treatment at Udayagiri.
2017-09-13
admin
Previous GHMC exhorts its workers to provide better civic amenities
Next OU Gets NAAC A+ Grade; JNTU, KU A Grade TELANGANA