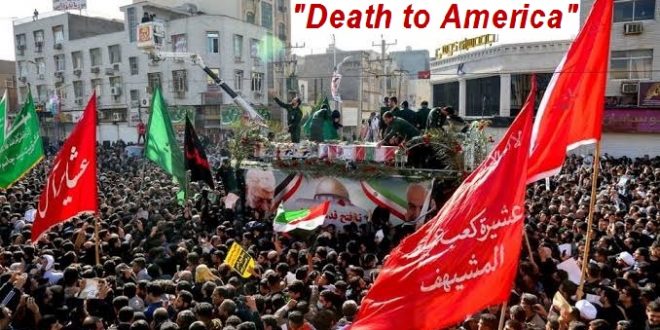 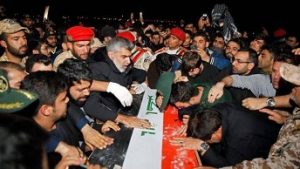 TEHRAN/ BAGHDAD/ DAMASCUS: Hundreds of thousands of mourners have taken to the streets in Iran to receive home the remains of Qasem Soleimani, the general killed in a US drone strike in Baghdad last week.

In Avhaz, mourners beat their chests and chanted “death to America”.

Soleimani was the architect of Iran’s sphere of influence across the Middle East and he was considered to be the country’s second most powerful man.

His assassination marked a significant escalation between Iran and the US.

Iran’s supreme leader, Ayatollah Khamenei, who had a close personal relationship with Soleimani, warned of “severe revenge” for the attack, and analysts said Iran might pursue cyber attacks against the US or traditional attacks on US targets or interests in the Middle East. 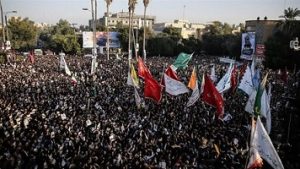 President Trump, who authorized the attack on Soleimani on Friday – an option refused by both Presidents Bush and Obama as too risky – said on Saturday the US was ready to strike 52 sites “important to Iran & the Iranian culture”.

In a series of tweets likely to raise concerns about a path to war between the two countries, Trump said the US would strike Iran “VERY FAST AND VERY HARD” if Iran targeted American bases or troops.

The president said the 52 targets identified by the US represented 52 Americans who were held hostage in Iran for more than a year from late 1979 after they were taken from the US embassy in Tehran. 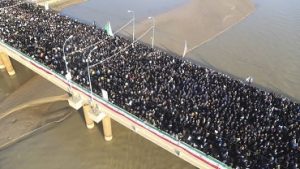 Iran’s foreign minister Mohammad Javad Zarif responded on Twitter, saying that the killing of Soleimani was a breach of international law and that any targeting of cultural sites would constitute a war crime.

Thousands of black-clad mourners gathered early on Sunday morning in the streets in Ahvaz in the southwest of Iran, where Soleimani’s body had arrived before dawn. The Irib state news agency showed footage of Soleimani’s casket, wrapped in an Iranian flag, being unloaded from a plane as a military band played, before it was flown on to Ahvaz.

The channel showed crowds gathered in the city’s Mollavi Square, waving flags and holding aloft portraits of Soleimani, who is seen by many in Iran as a hero because of his role as a soldier in the Iran-Iraq war of the 1980s and his closeness to the supreme leader. 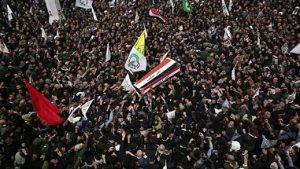 “A glorious crowd is at the ceremony,” said the commentator on Irib.

Similar scenes were later repeated in the city of Mashhad – the latest stage of three days of ceremonies throughout the country.

In the capital Tehran, members of parliament chanted “Death to America” for a few minutes during a session of the house, the ISNA News Agency reported. “Trump, this is the voice of the Iranian nation, listen,” speaker Ali Larijani was quoted as saying.

Soleimani’s body was flown back to Iran from Iraq alongside the bodies of five other Iranians killed in the drone strike, and the body of Abu Mahdi al-Muhandis, an Iraqi who commanded the Iranian-backed Kataib Hezbollah group and who was also killed.

Kataib Hezbollah issued a warning over the weekend to Iraqi security forces to “stay clear of American bases by a distance not less [than] 1,000m (0.6 miles) starting Sunday evening”, al-Mayadeen TV reported. 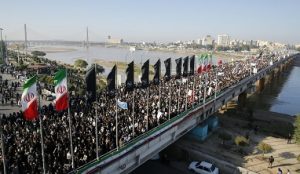 The US deployed 3,000 additional troops to the Middle East in the wake of its strike and advised its citizens to leave Iraq immediately.

The bodies of Soleimani, al-Muhandis and the other victims were due to be flown to Tehran later on Sunday for more funeral events.

On Monday, the supreme leader is expected to pray over Soleimani’s remains at Tehran University, followed by a procession through the city. The general’s remains will then be taken to the holy city of Qom for a ceremony ahead of a funeral in his hometown of Kerman on Tuesday.

While there was mourning in Iran over Soleimani’s death, there were also celebrations in the streets in Iraq and in Syria, where the general was instrumental in helping President Bashar al-Assad crush an uprising.

Speaking after the attack on Friday, President Trump told the world that he took the decision to assassinate Soleimani because the general was “plotting imminent and sinister attacks” on US diplomats and military personnel in Iraq and elsewhere in the region.

The Trump administration decided not to notify Congressional leaders in advance of the attack, as previous presidents have often done, and President Obama did before Osama Bin Laden was killed in Pakistan in 2011.

The White House sent its formal notification to Congress instead on Saturday, within the 48 hours after an attack that is required by US law.

Nancy Pelosi, the Democratic speaker of the House of Representatives, said in a statement that the White House notification raised “serious and urgent questions about the timing, manner and justification of the administration’s decision to engage in hostilities against Iran”. 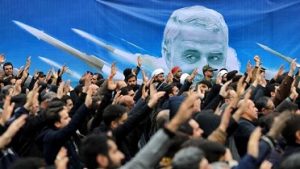 Ms Pelosi said the decision to classify the entire document “suggests that the Congress and the American people are being left in the dark about our national security”.

The surprise strike appeared to strain relations between the US and some European powers. The French president, Emmanuel Macron, telephoned Iraq’s acting prime minister to express support for the country’s sovereignty. Iraq’s leadership was not notified by the US ahead of the strike.

The UK prime minister, Boris Johnson, had not by Sunday morning made any comment about the strike or elected to cut short his holiday on the Caribbean island of Mustique.

The US secretary of state, Mike Pompeo, criticised the European response to the attack. Speaking to Fox News, he said: “Frankly, the Europeans haven’t been as helpful as I wish that they could be. The Brits, the French, the Germans all need to understand that what we did, what the Americans did, saved lives in Europe as well.”

Post Views: 7
2020-01-05
admin
Previous Quota For Municipal Polls Announced—50 % For Women
Next Iraqi Parliament calls for end of US troops