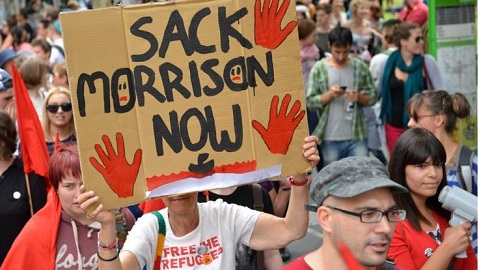 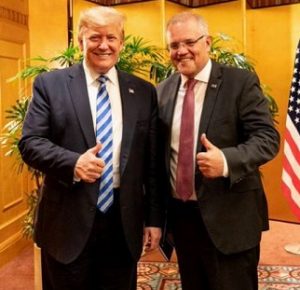 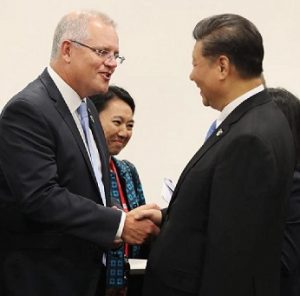 protection and other visa submissions and many more reasons, once again, ‘it has been proved that neither Scott Morrison can complete his tenure as Prime Minister (PM) nor the majority of citizens will accept him as Premier of Australia; sources told Messenger.

Sources also revealed more much in this scenario but that is not being published at present because of special request of sources but they promised that with the passage of time and after getting some solid evidences and verifications given details may be published time to time as have been publishing during last six years on regular basis but a following report in this connection would be helpful to evaluate and analyze the entire picture.

Four days before he would be toppled as Prime Minister in September 2015, Tony Abbott found himself standing with his then Immigration Minister Peter Dutton and Treasurer Scott Morrison in front of the cameras at Parliament House.

They were waiting for a meeting on Syrian refugees to begin. 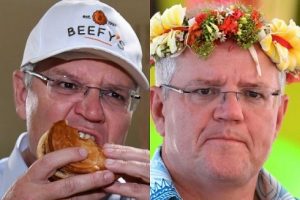 Dutton Was overheard, via a boom microphone, joking that the meeting seemed to be running on “Cape York time”.

“We had a bit of that up in Port Moresby,” Abbott responded, in reference to talks he had just held with Pacific Island leaders in Papua New Guinea about climate change.

“Time doesn’t mean anything when you’re about to have water lapping at your door,” Dutton continued before Morrison pointed out, sotto voce, there was a microphone overhead.

Four years and two prime ministers on, Tony Abbott is gone, Scott Morrison is Prime Minister and it is he who has just had to face the wrath of Pacific Island nations about climate change.

And as we mark the first anniversary of Morrison’s rise to the top job on August 24 last year, the Pacific Islands Forum seems a good place to start in reviewing the his first year as PM, and what has happened to the country and our politics in the meantime. 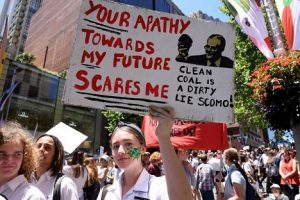 It is too easy to simply reflect on such anniversaries in terms of what they have meant for the rise and fall of one politician, or even one side of politics.

Just as he was the only one to notice an enormous boom microphone on a 3-metre stick hovering above him that day in 2015, Scott Morrison has proved himself a sharper politician than Dutton and Abbott in the way he has gone about running politics as Prime Minister.

He generally eschews the directly confrontational style of Abbott and Dutton, but that doesn’t mean he doesn’t share many of their views, or that he is not attempting to pursue the same sort of agenda.

The Prime Minister is open about his attempts to get politics off the front page but that can reflect what seems to be some confusion between managing the politics of an issue and managing a policy. 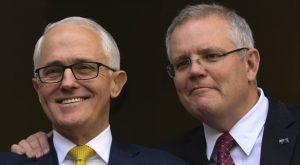 actually confronting the very large policy issues that our economy now faces, with its mixture of low growth, low inflation, and over-reliance on monetary policy

Eventually conceding this week that the tension between China and the United States kept him awake at night is different from finding a path for Australia through those tensions.

Morrison was able to chuck a bone the US this week — in an area that didn’t offend China — ahead of the G7 meeting, by agreeing to join the multinational force in the Gulf protecting oil shipments.

That would be a “multinational” force of the United States, Britain and … us (and Bahrain). We provide the fig leaf of respectability to suggest the whole operation isn’t one aimed at Iran by the United States, with the hope the language far-flung Australia has used to justify its involvement (“our interest is in de-escalating tensions, not increasing them”, “our national interest is in ensuring the continued flow of oil, etc etc”) will encourage other countries to join too.

Sleeping giant in the Pacific 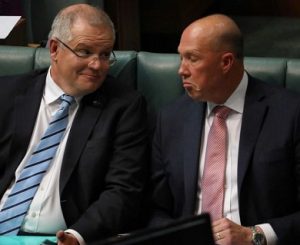 Straddling the minefield of internal Coalition tensions on climate and energy policy is a long way short of giving yourself any room to manoeuvre when you are talking to your Pacific Island neighbors.

The Pacific Islands Forum was once a definite Second XI event that Australian prime ministers would try to offload onto a colleague but it has now become a highly contested event, attended by enthusiastic delegations who consider they have an interest in the Pacific — from China to France and Britain.

And this year’s forum came after Morrison had announced the Pacific Step Up: Australia’s attempt to win back, or at least reinforce, its long history of influence in the region as China and other countries take an aggressive interest.

The Islands wanted a commitment Australia would agree to start closing down its coal industry — a demand no side of politics was ever going to agree to but what was revealing was that there was so little else we seemed to bring to the table, other than $500 million of rebadged aid funding which, it was said, would help with the effects of climate change, not its causes. 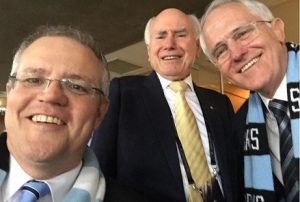 Climate change no longer a hypothetical

The Government might have moved publicly beyond the argument of whether climate change is happening but it is hard to escape the impression it thinks it is happening to someone else and that, therefore, the politics of the issue — apparently reinforced by the swing in coal seats at the election — is clear cut but it isn’t of course. In the Torres Strait Islands, sea walls are being breached in big tides and monsoons. Houses, infrastructure, graves and other sacred sites are being lost.

Elders from the same part of Australia that brought on the Mabo case have lodged a case against Australia in the United Nations Human Rights Committee, arguing that not doing anything about climate change is a breach of the islanders’ human rights.

And if the cynics in the Government view this as not an issue because it involves a far-flung community, an Indigenous one at that, and (yawn) the United Nations, they might like to consider how the structures of their own government are now also being influenced by climate change. 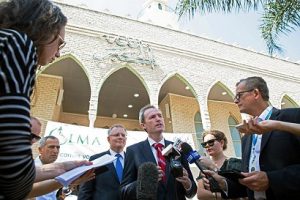 When the agriculture portfolio was carved up after the election, David Littleproud became the Minister for Water Resources, Drought, Rural Finance, Natural Disaster and Emergency Management: a range of jobs which bears a striking resemblance to the need to deal with the varying impacts of climate change.

Our politics have changed in the 12 months Morrison has been Prime Minister. The Labor Party is no longer in the ascendancy; the tensions within the Coalition have taken on different forms but those tensions have not gone away. We are in a holding pattern on crucial areas of policy on the economy; strategic issues; asylum seekers and climate and energy.

That would be a lesson many of our current leaders could take when reflecting on the career of Tim Fischer.