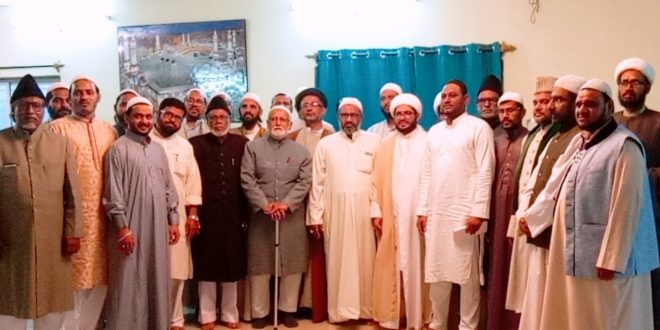 Hyderabad Dec 20 (PMI): The president Majma-e-Olama wo Khutaba Hyderabad Deccan Janab Moulana Ali Hyder Farishta Saheb Qibla and executive body members including all members criticized the views of Charminar MLA Mr Mumtaz Ahmed Khan of AIMIM that he is trying to convert the religious matters into political issue. Moulana Farishta says that a political leader is the leader of all and not limited to few, he (Mumtaz Ahmed Khan) is the MLA for every resident of his constituency irrespective of cast, creed and religion, where he has to serve everyone but not limited only to Sunni Muslim and he has expressed his feelings regarding formation of committee of Daira-e-Mir Mohammed Mominr.a that he will not allow to form the committee if it does not comprise of both Shia and Sunni Members jointly. I will risk my political career and stand against the committee formation if only Shia Muslim will be in the committee, said Mumtaz Ahmed khan.

He claims to be brought up in around the area of Mir Mohanmmed Momin graveyard and he has rights to be buried here and become a member in committee. According to his views it must be followed elsewhere in the twin cities of Hyderabad and Secunderabad as well as in entire Telangana State to allow Shia Muslims to be buried in Sunni graveyards and make local Shia Muslims the committee members of the graveyards in that locality. Mr Mumtaz Ahmed Khan being a representative of the residents of his constituency should not give such statements which can lead create disharmony between two major sects of Muslims.  He must know that Mir Mohammed Momin graveyard is a Shia Wakf property and has been handled by Shia Muslim members for all these while.

Other thing which he précised on was to remove Mahfouzi Qabr (Reservation of Grave) and to utilize the empty place to bury dead bodies in the graveyard. I have my own “Had wad” in Mir Mohammed Momin graveyard where my grandfather, father and most of the family members are buried, said MLA Mumtaz Ahmed Khan. If you’re of the opinion that no place should be reserved for grave in the graveyard(s) then how can he reserve a piece of land in the above said graveyard and force others not to not reserve graves for them.

The Shia Muslims are very disappointed and angry on the attitude of two Shia Muslims representatives Moulana Syed Nisar Hussain Hyder Aga, Shia Member of  Telangana Wakf Board and MLC Mirza Riyazul Hasan Afandi (AIMIM) for not taking stand against the views and feelings of Charminar MLA and also didn’t even try to clarify or educate him about the history of graveyard but stood beside him in silence listening to him. Majority of Shia Muslims believe that these have occupied place just for themselves and not for community and its issues.

The Shia people are demanding with both of Shia personalities to stand up and solve the issues or else resign from their respective posts if they are unable to serve their community.

Naqeeb-e-Millat Barrister Asaduddin Owasi (MP Hyderabad) has been working hard and raising his voice for Muslims and Dalits to protect their interests and rights in all over India and his MLA is trying to create disharmony among Muslim sects in his Parliamentary Constituency. Shia Muslims request with Naqeeb-e-Millat Barrister Asaduddin Owasi to intervene in this matter and take disciplinary action against Mr Mumtaz Ahmed Khan who is trying to hurt the sentiments of the Muslims and creating differences between them(PMI) .