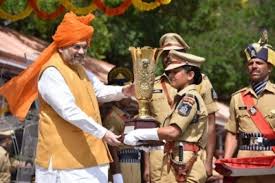 Hyderabad, Aug.24 (PMI): Union Home Minister Amit Shah today presided over Passing out Parade of the 70th Batch of Indian Police Service (IPS) Probationers at Sardar Vallabhbhai Patel National Police Academy (SVPNPA) here.
The Union Home Minister inspected the parade and awarded 103 best performing probationers, including 15 lady officers, six Royal Bhutan Police and five Nepal Police Service officers. He also congratulated the probationary officers, especially lady officers, and gave best wishes for their bright careers. He expressed pride that the young officers would soon be joining the distinguished tradition of Indian Police Service in serving the Nation with utmost dedication.
Saluting the “Iron Man of India”,  Shah said the Academy was established in Hyderabad, a place that saw a historic Police Action under the leadership of  Vallabhbhai Patel in 1948 that resulted in the merger of the erstwhile Hyderabad State into the Indian union. He paid tributes to Sardar Patel for integrating over 600 princely states and giving shape to the Indian Union. He also said the only State that remained from truly integrating into the Indian union was Jammu & Kashmir. It was also integrated by a bold step taken by Narendra Modi government by abrogating Article 370. Today, Sardar Patel’s vision of a unified India has been realized in true spirit, he observed.
Addressing the probationers, Shah said IPS was envisioned as the forbearer of preventing corruption in India by Sardar Patel. “Your aim must not end by getting selected in Civil Services, but the path to make India free from corruption and become safe and secure from external and internal threats, starts from here. The future would present a lot of challenges and hardships. You are becoming a part of the legacy of those 33,000 officers, who have laid down their lives in service of the Nation. You have to always work dedicatedly to ensure security and integrity of India. You would have to remember the oath taken here today and keep treading on the path of committed service to the Nation all your life. Your life must be dedicated to uplifting the lives of thousands of fellow citizens who have not got this opportunity”.
Motivating the young probationers to become team leaders and lead from the front by example, Shah said, “Sampark (Connect), Samvaad (Communicate) aur Samanvay (Coordinate) are the core principles of team building and achieve success in challenging situations”. He emphasized on reaching the people, communicating constantly and building a connect, in order to serve them in the most successful manner. He said politicians only get elected for five years, but civil servants get the opportunity to serve the country for whole life, which must not be wasted.  Being free from fear and taking decisions for the betterment of masses, while abiding by the tenets of the Constitution, is the hallmark of an officer and only by following this principle can one become a successful police officer, he added.
Shah stated, “Prime Minister of India, Shri Narendra Modi has given a vision of a SMART Police (S – Sensitive and Strict; M – Modern with mobility; A – Alert and Accountable; R – Reliable and Responsive; T – Trained and Techno-savvy). The police forces must continuously remodel on this vision to successfully face the challenges in the future”. Further, he stated that PM’s vision of a 5 trillion dollar economy can only be achieved when the law and order situation in the country is stable and peaceful. A SMART police force is the flag bearer of achieving PM’s vision of a 5 trillion dollar economy, he added.
Governor of Telangana E S L Narasimhan and Union Minister of State for Home Affairs,  G. Kishan Reddy, along with senior officers and family members of the probationers were present. (PMI)