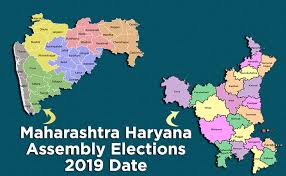 Campaigning for assembly elections in Maharashtra and Haryana will end this evening. Prominent leaders of all the political parties are making their last-ditch efforts to woo the voters.
Electioneering for by-polls to two Lok Sabha constituencies and 51 Assembly seats in 17 states will also come to an end today. By-polls will be held in Samastipur Lok Sabha seat in Bihar and Satara Lok Sabha seat in Maharashtra. By-polls will be held in 11 Assembly constituencies in Uttar Pradesh, 6 in Gujarat, 5 seats each in Kerala and Bihar, 3 in Sikkim, 4 each of Punjab and Assam, 2 each of Tamil Nadu, Rajasthan and Himachal Pradesh and one seat each in Odisha, Telangana, Madhya Pradesh, Chhattisgarh, Meghalaya, Pudducherry and Arunachal Pradesh.
Polling in Haryana and Maharashtra, by-polls for two Lok Sabha constituencies and 51 Assembly seats will take place on Monday. Counting of votes will be held on the 24th of this month.
In Haryana, senior leaders of major political parties BJP, Congress, INLD and Jannayak Janta Party are campaigning in various parts of the state.
In Maharashtra,  Senior BJP leader and Home Minister Amit Shah is scheduled to address rallies in Navapur, Akole and Karjat today.
In Uttar Pradesh, electioneering has reached its peak for 11 assembly seats where a by-election will be held on Monday.