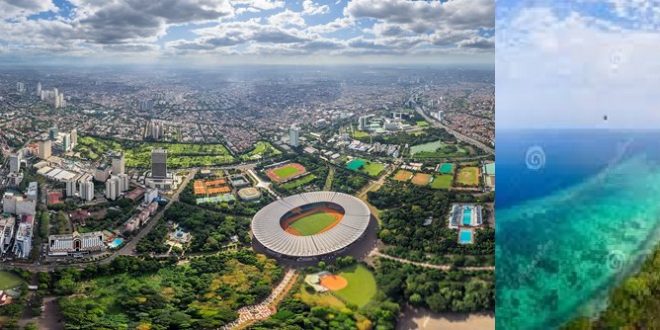 Magnitude-7.2 quake in Indonesia, no threat to Australia

MELBOURNE/ JAKARTA/ DARWIN: An earthquake of magnitude 7.2 struck in a remote area of Indonesia in the Banda Sea on Monday, but there were no initial tsunami warnings.

The quake hit at a depth of 220 km (136 miles), the USGS said. There were no immediate reports of damage or injury.

The Hawaii-based Pacific Tsunami Warning Center said in a bulletin a destructive Pacific-wide tsunami was not expected after the quake, which was initially recorded with a magnitude of 7.2. 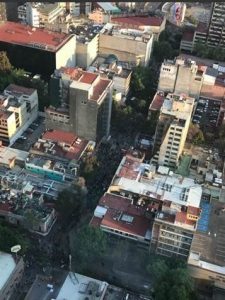 Darwin Central Business District (CBD) buildings have been evacuated following a magnitude-7.2 earthquake in the Banda Sea, with engineers now looking for signs of structural damage.

About 200 staffs were evacuated from the Health House building on Mitchell Street and have been sent home while the building’s safety is assessed.

Deputy Chief Executive of Health Policy and Strategy Maggie Jamieson said it was a precautionary measure.

“There are some cracks — whether they’re old or new we don’t know — and that’s why we’re getting some structural engineers to come in and check it,” she said.

“We hope that everything is safe and sound and we can come back to work, but we’ll wait on the news to find out what’s happening and we’ll notify our staff as soon as we know.”

Territorians as far as Maningrida and Katherine, more than 300 kilometres away, reported feeling tremors.

However St John’s Ambulance said there were no reports of injuries.

No threat of tsunami to Australia 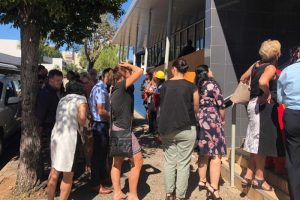 “Just before midday local time, at 11:53am, we recorded a major 7.2 earthquake which occurred in the Banda Sea about 700 kilometres north of Darwin,” he said.

“It’s certainly possible to get aftershocks from an earthquake of this sort of magnitude — it’s very likely.

He said it was unlikely to cause a tsunami because of the depth at which it struck, which was estimated to be 207 kilometers.

“A tsunami is caused when the earthquake ruptures the sea floor to the surface, and moves the water column above the earthquake to generate a wave,” he said.

“If the earthquake is very deep it’s unlikely that it will have ruptured to the surface, and that’s what the Bureau of Meteorology has made [in its] assessment.”

Resident felt stairwell ‘rocking from side to side’ 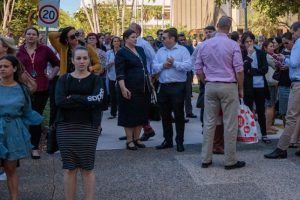 Domenic Fracaro was one of the hundreds of residents and office workers who evacuated during the earthquake.

He said he was preparing lunch at a kitchen bench “when I heard this roar”.

“All the drawers started opening in the kitchen, and I said to her, ‘what’s going on?’.

“So I left everything there and we ran down the fire escape, but while we were in that stairwell, the stairwell was rockin’ that hard, just side to side.

“I lost my balance, a couple of times. It’s the worst one I’ve ever experienced in the four years we’ve been here, that’s for sure.”

Consulate and government offices among those evacuated 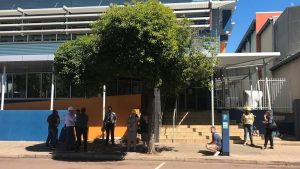 The Indonesian consulate was one of the buildings evacuated during the event, with workers sharing their experiences of the frightening moment.

“I was in my office and then I felt the shake — I could see my table was moving, and the ceiling was shaking,” consulate worker Jherry Matahelumual said.

“And then I left the room and all my colleagues felt the same thing, so we ran to the carpark to avoid everything above us, and save ourselves.”

“There was a really noticeable tremor and it then slowly subsided, then there was another big tremor — the second one was definitely the worst of it,” she said.

Ms Grainger was on the third floor of a CBD building, and she said she was “shocked” and “concerned for everyone’s safety” as the tremors continued.

“We definitely felt the significant sway and movement in the building, that’s for sure,” she said. 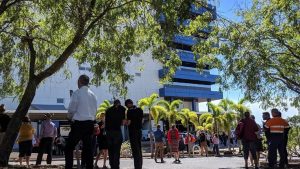 Hundreds of people across Darwin and nearby Palmerston took to social media to report feeling the earthquake.

“I watched the walls of my house wobble like jelly! There were two. One small one and then a larger on shortly after.” — Lach Good

“It lasted at least one minute in Stuart Park, I was confused! Then heard sirens.” — Laurelle Halford

“Rattle and shake in Parap, pool water was sloshing side to side.” —Kim Lane

“The biggest one I have felt in Darwin for years.” — Tee Rivas

“We shook for at least a minute at Wagaman. Was sitting on bed and when I first felt movement, I thought the cat had woken up! But then quickly got more severe — windows rattled, the outside chime sang and neighbourhood dogs started barking! I was wondering if I should evacuate! But then it stopped. It made my head feel a bit dizzy.” — Jen Rose

“We are on the 7th floor of Quest Palmerston, I felt the tremor start about 3mins before the building started to sway/shake. I got dizzy then everything started shaking, I thought the washing was banging the wall then EVERYTHING was like a wave.” — Amanda Jayne

“I’m 8 stories high & in CBD; it brought back terrible memories of Newcastle in 1989. Me and the cats definitely vacated the building.” — Stephen Kerry