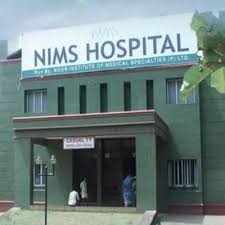 Hyderabad, Feb.9 Criminal negligence on the part of the surgeons of the popular State-owned Nizam’s Institute of Medical Sciences (NIMS) has pushed a woman patient to jaws of death.

According to the information, a 33-year-old housewife Maheshwari Choudary of Mangalhat in city was admitted to the NIMS with acute abdominal pain on Friday. Later, an X-ray revealed that artery forceps (in the shape of scissors) was the reason for the stomach pain. Immediately the hospital authorities admitted the patient and conducted an emergency procedure to remove the artery forceps known as clamps used by surgeons to remove tissues and hold objects during surgery, firmly embedded in her stomach on Saturday morning.

According to her relatives, Maheswari had undergone a surgery for hernia at the NIMS on December 2 and since then was complaining of severe stomach pain. “She was complaining of stomach-ache within days of surgery at NIMS. We tried different kinds of medicines but her condition did not improve. This was totally due to negligence of the surgeons because of which she had to suffer,” said Mahadev, a close relative.

NIMS Director Dr K. Manohar said their surgical teams were conducting the surgery. They also set up a three-member committee to conduct an inquiry into the incident and submit a report in the next few days. He said action will be taken on the basis of the report of senior doctors. Stating that the incident was most unfortunate, Dr Manohar said such an incident did not happen in the hospital in the last 30 years.

It is learnt that the housewife was operated upon for hernia by Dr Bheerappa and Dr Venu in Surgical Gastroenterology Department assisted by staff nurse Saleema on December 2, 2018. They opened the abdomen and left a scissors at the end of surgery. After her discharge from the hospital, the patient suffered severe pain with scissors in her stomach for 70 days. As Dr Bheerappa was harsh and callous with them, the patient’s relatives staged a dharna before the hospital and lodged a complaint with the Punjagutta police.