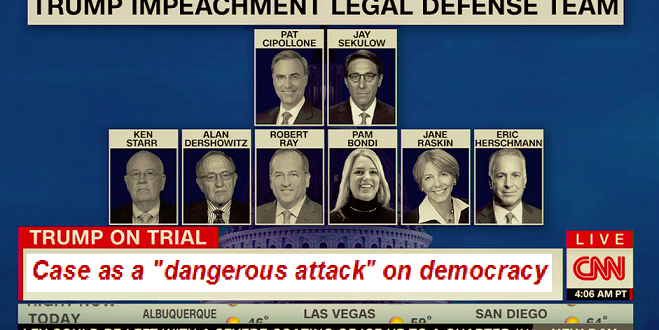 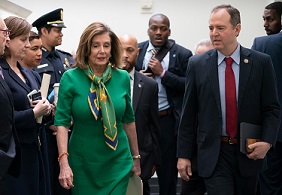 WASHINGTON: US President Donald Trump’s legal team has given its first formal response to the impeachment charges against him, describing the case as a “dangerous attack” on democracy.

The document said the impeachment articles failed to allege any crime and were a “brazen” attempt to interfere with the 2020 presidential elections.

The response came as the Democrats filed their brief for the proceedings.

Opening statements in the trial will begin next week.

Trump is the third US president in history to face an impeachment trial. He is accused of abuse of power and obstruction of Congress. He has denied wrongdoing and branded the case against him as a “hoax”. 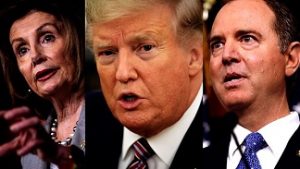 The House, controlled by opposition Democrats, impeached the president last month. The Senate, controlled by Trump’s Republican Party, will decide whether to convict and remove him from office.

In their brief filed earlier on Saturday, House Democrats laid out their arguments for why Trump should be removed from office.

They said the president had “abandoned his oath to faithfully execute the laws and betrayed his public trust”, and called his conduct the “worst nightmare” of the country’s founding fathers.

The six-page response outlines the defence the president’s legal team expects to use in the upcoming impeachment trial. 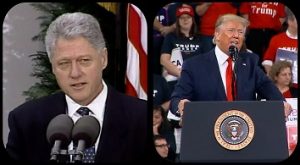 The team, led by White House counsel Pat Cipollone and Trump’s personal lawyer Jay Sekulow, said they were challenging the impeachment on both procedural and constitutional grounds, claiming that the president did nothing wrong and had not been treated fairly.

Their filing said the articles of impeachment submitted by House Democrats were a “dangerous attack on the right of the American people to freely choose their president.”

“This is a brazen and unlawful attempt to overturn the results of the 2016 election and interfere with the 2020 election, now just months away,” it added.

Trump and his legal team said the impeachment charges failed to allege “any crime or violation of law” and were “the result of a lawless process that violated basic due process and fundamental fairness”. 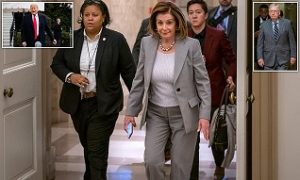 The lawyers said Trump “categorically and unequivocally” denies all allegations.

The filing on Saturday came a day after Trump finalized his defence team, which includes special prosecutors from former President Bill Clinton’s impeachment.

In their own 111-page filing on Saturday, Democratic lawmakers leading the case against Trump summarized arguments made during weeks of testimony in the impeachment investigation last year.

They said the president should be convicted and removed from office “to avoid serious and long term damage to our democratic values and the nation’s security.”

“The case against the president of the United States is simple, the facts are indisputable, and the evidence is overwhelming,” they said. 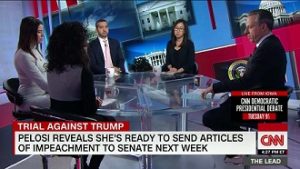 “The only remaining question is whether the members of the Senate will accept and carry out the responsibility placed on them by the Framers of our Constitution and their constitutional Oaths,” they added.

President Trump is accused of pressuring Ukraine to dig up damaging information on one of his main Democratic challengers for the presidency in 2020, Joe Biden, and his son Hunter.

Hunter worked for a Ukrainian company when Joe Biden was US vice-president.

The president is accused of dangling two things as bargaining chips to Ukraine – withholding $400m of military aid to Ukraine that had already been allocated by Congress, and a White House meeting for Ukraine’s president.

Democrats say these amounts to an abuse of presidential power. 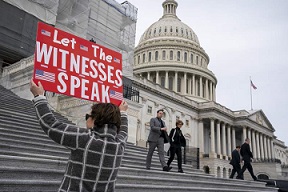 Trump is also accused of obstructing Congress by refusing to co-operate with the congressional inquiry.

The US president was impeached last month, opening the way for a Senate trial.

A two-thirds majority of 67 votes in the 100-seat Senate is required to convict and oust Trump. But because there are only 47 Democrats (and 53 Republicans), the president is widely expected to be cleared.

In the unlikely event of Trump being found guilty, he would be removed from office and Vice-President Mike Pence would be sworn in as president.

A simple majority of senators – 51 – could also vote to end the trial should they wish. (Int’l News Desk)