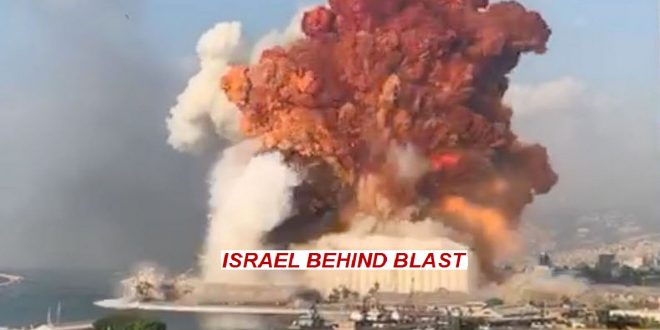 BEIRUT: Lebanese President Michel Aoun called for an emergency cabinet meeting on Wednesday and said a two-week state of emergency should be declared following a massive explosion in Beirut that killed at least 78 people and injured 4,000 others. 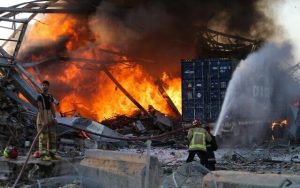 The explosion on Tuesday sent shockwaves across the city, causing widespread damage even on the outskirts of the capital.

Officials said they expected the death toll to rise further as emergency workers dug through rubble to rescue people and remove the dead.

The cause of the explosion was not immediately clear.

Officials linked the explosion to some 2,700 tonnes of confiscated ammonium nitrate that were being stored in a warehouse at the port for six years.

But in a statement, US President Donald Trump said US military generals have told him that they “seem to feel” that the incident was a “terrible attack” likely caused by a bomb.

The massive explosion in the Lebanese capital, Beirut, has triggered a 3.5 magnitude earthquake, according to Germany’s geosciences center GFZ.

The explosion, that killed at least 78 people and injured about 4,000 others was heard and felt as far away as Cyprus more than 200 kilometers (180 miles) across the Mediterranean. 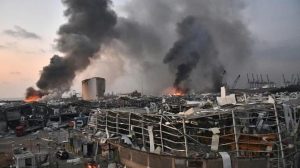 Lebanon’s interior ministry said it appeared that a large cache of ammonium nitrate, estimated at 2,700 tonnes, stored at the city’s port set off the blast.

It also recommended in advance of a Cabinet meeting on Wednesday that a committee be tasked with investigating the blast and present its findings within five days to mete out the maximum punishment for those responsible.

The death toll from the massive blast at a port warehouses near central Beirut has risen to 78, with over 4,000 wounded. 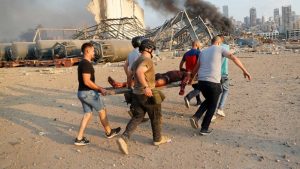 Officials said they expected the death toll to rise further after Tuesday’s blast as emergency workers dug through rubble to rescue people and remove the dead.

President Michel Aoun called for an emergency cabinet meeting on Wednesday and said a two-week state of emergency should be declared.

US President Donald Trump said the huge explosion that shook Beirut appeared to be a “terrible attack.”

“We have a very good relationship with the people of Lebanon and we will be there to help. It looks like a terrible attack,” Trump told reporters at the White House.

“I’ve met with some of our great generals and they just seem to feel that this was not some kind of manufacturing explosion type of an event … They seem to think it was an attack. It was a bomb of some kind.” 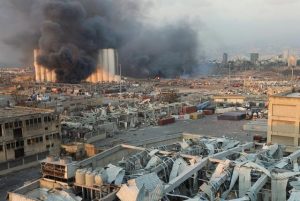 The United Nations Interim Force in Lebanon (UNIFIL) said one of its ships docked at the port was damaged in the explosion, leaving a number of its personnel wounded, including some in critical condition.

UNIFIL said it was transporting the wounded peacekeepers to the nearest hospitals and was assessing the situation, including the scale of the impact on its personnel.

“We are with the people and the Government of Lebanon during this difficult time and stand ready to help and provide any assistance and support,” Major General Del Col, UNIFIL head of mission and force commander, said in a statement.

The US embassy in Beirut warned residents in the capital about reports of toxic gases released by the explosion, urging people to stay indoors and wear masks if available.

Lebanon’s High Defence Council, which brings together the president and all major security agencies,declared Beirut a disaster-stricken city. 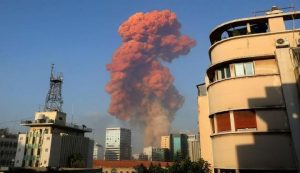 Investigation committee to say who is responsible within days

After the council meeting at the Baabda presidential palace, which was also attended by Prime Minister Hassan Diab, the following was announced:

– An investigation committee has been tasked to say who was responsible for the blast within five days.

– The families of victims will be paid compensation.

– Import traffic will be routed to the Tripoli port in northern Lebanon.

At least 60 of the wounded people were in critical condition, according to the Red Cross.

The organisation said it had also set up triage and first aid stations to help people with non-critical injuries.

Aoun said that it is “unacceptable” that 2,750 tonnes of ammonium nitrate were stored in a warehouse for six years without safety measures, according to statements published on the presidency’s Twitter account. 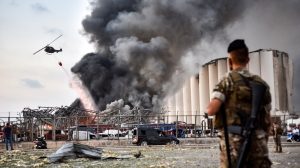 Aoun also pledged that those responsible would face the “harshest punishments” and said a two-week state of emergency should be declared.

2,700 tonnes of ammonium nitrate at Beirut’s port when they exploded: Official

General Security Chief Abbas Ibrahim said some 2,700 tons of ammonium nitrate were in Beirut’s port on the way to Africa when they exploded.

Ibrahim made the comments after the meeting of Lebanon’s Higher Defence Council.

According to Lebanon’s health ministry, the death toll has risen to 73, with 3,700 wounded.

Confusing, devastating, disastrous: these were some of the words people in and around Beirut used to describe the huge explosion that ripped through the Lebanese capital.

The explosion at Beirut’s port was felt across the city and beyond, causing widespread damage and spreading panic.