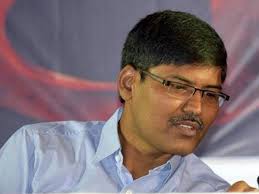 Hyderabad, Jan.22  : MRPS leader Manda Krishna Madiga on Wednesday demanded that the State government immediately release OU professor who was arrested by the Siddipet police recently. He said Chief Minister K Chandrashekhar Rao was the only CM in the country with total understanding about the Maoists problem.
He made these remarks after meeting with the wife and the father of Kasim at their residence here. Addressing mediapersons later, he reminded that the CM had said that the Maoists were fighting for food, shelter and clothes. The CM had also termed the acts of the Maoists not wrong. He also said the CM had promised to implement  the agenda of the Maoists after formation of the Telangana State. He urged the CM to react on the issue and hold discussions with the Maoists.

2020-01-22
admin
Previous Cyber Security Conclave 5.0 – The Next Gen Threats And Solutions At HICC today
Next Democrats roll out case against Trump’s impeachment