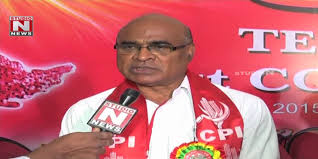 Hyderabad,  Alleging that the Chief Minister K Chandrasekhar Rao was ruling the State while joining hands with Telangana betrayers, CPI state secretary Chada Venkat Reddy said that the cause of achieving Telangana state was not fulfilled because of KCR’s dictatorial attitude.

Addressing the Hyderabad City CPI Counsel’s meeting held at Himayatnagar here on Monday, Chada alleged that KCR passing time while resorting to caste politics. KCR was giving assurances indiscriminately to the people instead of fulfilling the assurances made during elections, he pointed out. He said that the people came to know that KCR was not a practical CM but was a ‘mere words’ CM and the people would teach a fitting lesson to KCR in next elections. KCR pushed the state into debts in the name of development, he alleged and said that KCR will remain in the history as a betrayer as he was cheating the people while giving lot of assurances. 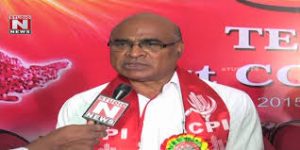 CPI City secretary ET Narasimha has said that the state government was not fulfilling the assurances made by it to the people ofHyderabad. He alleged that KCR was done injustice to the real Telanganaites and developed friendship with the MIM, which was for united Andhra Pradesh state, party and praising each other. “It is the best example for KCR’s attitude”, he pointed out. Narasimha said that their intention was to develop all sections of the people of Hyderabad and CPI was ready for any movement for it.