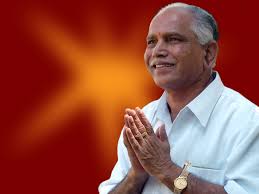 BJP continued its focus on the farming community, not just to earn the backing of one of the biggest support bases but also reinstate its chief ministerial candidate B.S.Yeddyurappa’s image as a pro-farmer leader

Dharwad, Karnataka: Taking a leaf out of its Uttar Pradesh state election manifesto, the Bharatiya Janata Party (BJP) in Karnataka on Friday said it would waive farm loans of up to Rs1 lakh each, taken from various institutions including nationalised banks.

The party continued its focus on the farming community, not just to earn the backing of one of the biggest support bases ahead of assembly elections on 12 May but to also reinforce the image of its chief ministerial candidate B.S. Yeddyurappa as a pro-farmer leader.

“Crop loan waiver up to Rs1 lakh, including all loans from nationalised banks and cooperatives, in our first cabinet meeting for the benefit of our Annadaatas,” the BJP said in its 64-page manifesto, released by Yeddyurappa, who is the president of the party’s Karnataka unit, in Bengaluru on Friday.

The BJP’s decision to promise farm loan waivers was aimed at taking the wind out of the Congress’ Rs8,165 crore farm loan waiver last year and other assurances that the ruling party made in its manifesto.

Karnataka has turned into a fierce contest with the entire central leadership of the two national parties—the BJP and the Congress—extensively campaigning in the state over the last few weeks hoping to win the support of key communities, including farmers, who account for over 60% of the state’s total population.

The BJP’s promise is significant as the Uttar Pradesh government had waived farm loans worth more than Rs36,000 crore after it came to power in the state last year.

The BJP manifesto also announced a Negilayogi Yojane to provide direct income support of Rs10,000 each to 2 million dry land and marginal farmers.

Yeddyurappa also said that he would reintroduce the Karnataka Prevention of Cow Slaughter and Preservation Bill 2012.

The BJP also announced that it would provide free smartphones to women from below-poverty-line (BPL) families and free laptops to every student enrolling in a college. The party also said it would provide free sanitary napkins to BPL women and girl students and at Rs1 to other women under a Stree Suvidha Scheme.

The party also said it would provide a three-gram gold thaali (mangalsutra) and Rs25,000 for the marriage of BPL women.

The party accused the Siddaramaiah government of misusing the state machinery and blamed it for the poor law and order situation in the state and weakening the Lokayukta, the anti-corruption watchdog. The BJP said it would restore the office of the Lokayukta to its full efficacy. It also plans to enact the Karnataka Whistleblower Act and release a white paper within 100 days of forming the government on the fiscal health of the state.