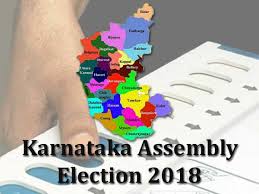 Campaigning is intensifying for the 12th of next month’s Karnataka Assembly elections. BJP National President held a roadshow in Davangere today, during which he sought votes for his party candidates.
Union Minister Sadanand Gowda campaigned in Bengaluru and asked voters to elect BJP to end, what he called, a fearful environment created by goons in the city.
Addressing a public rally in Mudhol, Chief Minister Siddaramaiah accused JD(S) of having the tacit understanding with BJP in this election. He pointed out that BJP has deliberately fielded a weak candidate in Chamundeshwari to help JD(S). Congress leader DK Shivakumar is attending a public rally in Hassan today.
Amit Shah is concluding his five days tour of the state tomorrow. BJP sources have said that the party manifesto will be released tomorrow in Bengaluru.
Meanwhile, Chief Minister Siddaramaiah has claimed that he has pictorial evidence of H D Kumaraswamy and Amit Shah travelling together in a plane which Siddaramaiah said is proof that both have electoral understanding in this election.
In another development Farmers leader, Kuruburu Shanthakumar said that the farmers in T.Narasipura, Varuna and Chamundeshwari assembly segment have taken a decision to vote for a party that implements their charter of demands
Post Views: 11
2018-04-29
admin
Previous Water conservation ust be a social, collective responsibility: PM Modi in Mann Ki Baat
Next BJP President Amit Shah attacks Congress over its Jan Aakrosh rally, saying that it is nothing but a Parivar Aakrosh Rall