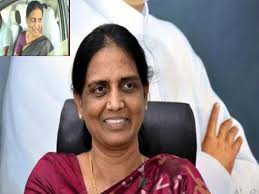 Hyderabad, March 14 (PMI): Former home minister and Maheswaram MLA Sabita indra Reddy, who has decided to join the ruling TRS party, on Thursday opened her mouth. She said she was joining the ruling party for the sake of development of her constituency. She also made it clear that the development of the State was possible only with the help of regional political parties.
Speaking to mediapersons, Sabita heaped praises on former Chief Minister late YS Rajasekhar Reddy and said the Telangana State was developed by him. She also said she would work hard for the development of the entire Ranga Reddy district and her goal would be to ensure victory of the TRS party in all the elections to be held in the State in the days to come. (PMI)