Hyderabad Feb 19 (PMI): For past four years Guroh-e-Shada-e-Shabbira.s has been organizing Majlis-e-Aza Syed-dus- Shohadaa.s and(or) Jashan at Bargah Hzt. Abbasas Dewan Dewdi on every first Thursday of Arabic calendar month as per the falling dates of mourning or birth anniversaries of 14 infallibles (14 Masoomeena.s) and other members of prophet Mohammeds.a.w.s family. Jashan-e-Masarat was organized on 5th Rajjab 1442H i.e., 18th February  2021 at Bargah Hzt. Abbasas on the occasion of birth anniversary of Imam Ali un Naqias in which members of Guroh-e-Shada-e-Shabbira.s  and other visitors(zaireen) attended jashan. 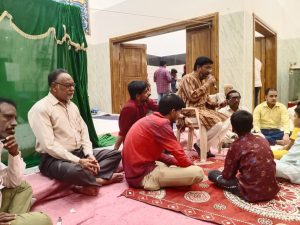 The suggestion of organizing majlis or jashan on every first Thursday of Islamic month respectively at Bargah-e- Hzt Abbasa.s at Dewan Dewdi was put forward by Mr Syed Hussain Ali Sajjad some time back before Syed Najaf Ali Shoukat and the members of the Guroh-e-Shaida-e-Shabbira.s. Najaf ali Shoukat and all other members of Guroh-e-Shaida-e-Shabbira.s appreciated the suggestion of organizing majlis or jashan and participated in it regularly. Many visitors who come for ziyarat have also appreciated this and started attended majlis or jashan that is being organized on that particular day.

Mr Syed Hussain Ali Sajjad took the responsibility to organize Majils-e-Aza or Jashn-e-Masarat respectively and the first mahfil was organized on 2nd Rabbi-us-sani 1439 correspondence to 26th December 2017, since then these Mahafil of Majlis and Jashn are being organized promptly till date.