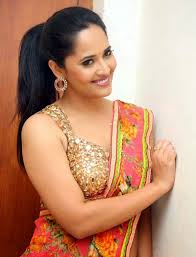 Hyderabad,  In the wake of Tuesday’s controversial episode in Tarnaka and the police booking her for assaulting a boy for seeking a selfie with her, TV anchor “Jabardast” fame Anasuya bade a good-bye to the social media.
Following the atrocious incident, the anchor was trolled on social media. Even after she clarified on the incident giving her version of the story, the netizens were unsparing her in their criticism and abusive comments continued to rain on her on social media. As the situation was slipping of control, Anasuya blocked all her social media accounts, including her Facebook and Twitter accounts.
It may be mentioned here that Anasuya was synonymous with “Jabardasth” and Jackpot TV shows. She was also seen in a few movies. Currently, the anchor was working in Ram Charan’s “Rangasthalam” and Mohan Babu’s “Gayathri” films.