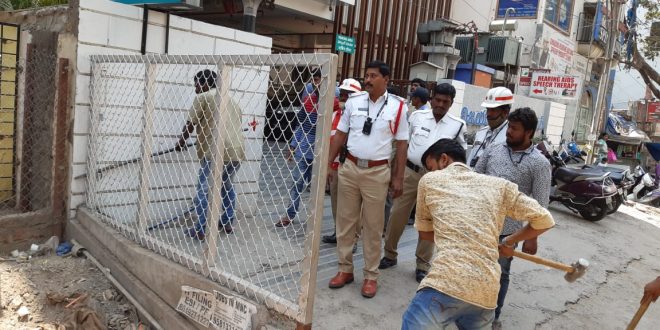 Cyberabad Traffic Police Officers today visited the Nizampet area and inspected the entire stretch of road from Nizampet Road from metro station upto Nizampet village to identify bottlenecks and other traffic related problems in the area to take corrective steps.
The inspection was taken up in view of regular traffic congestion and road safety issues on the road.
Following issues have been identified after careful observation of the road :

All the above issues have been specifically noted and they would be addressed to the concerned department officials (Ghmc, hrdcl, ) for necessary action and pursued by CTP.
CTP also noted that the public are not following lane discipline and other traffic rules and are adding to the chaos. Hence, CTP urges the road users in Nizampet area to adhere to traffic rules and cooperate traffic police in better management of traffic in the area.
Also, in coordination with the GHMC officials, removal of encroachments was also taken up. CTP also reiterated that strict action as per law would be taken against any further encroachments along the route.
DCP Traffic, Addl dcp Traffic Amar Kanth reddy, acp traffic Madhapur, Kukatpalli traffic inspector Narasingarao, Traffic engg cell inspector Vasu were present during the visit.