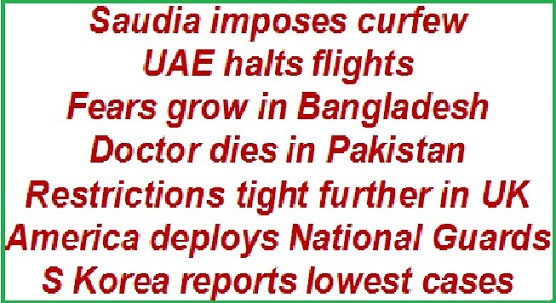 India locks down over 100 million people 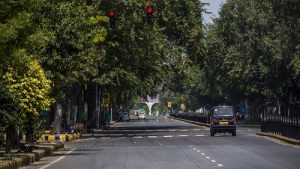 Authorities in India have placed more than 80 cities and districts across the country under stringent lockdown after cases of coronavirus were detected there, as the world’s second-most populous nation stepped up measures to halt the spread of the pandemic.

“State governments will issue orders allowing only essential services to operate in about 75 districts with confirmed COVID-19 cases or casualties,” said a home ministry official in New Delhi on Sunday.

The state shutdowns came during a 14-hour voluntary curfew that Prime Minister Narendra Modi said would test India’s ability to fight the pandemic.

“This is the start of a long fight,” Modi tweeted as the curfew came to an end and people came out onto their balconies and stood near open windows to clap, bang on metal vessels and ring bells to cheer emergency workers battling the spread of the coronavirus. 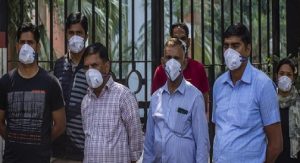 On Monday, Modi said many Indians were not taking the lockdown seriously. “Please save yourself, save your family, follow the instructions seriously,” he said on Twitter.

Al Jazeera’s Elizabeth Puranam, reporting from New Delhi, said pretty much all the major cities around the country are in lockdown along with 75 districts, which make up about 10 percent of the country’s population.

“No one is being allowed to go out unless they work in essential services such as healthcare,” she said.

“All inter-state buses have cancelled, so have metro services around the country.”

According to media reports a large number of migrant workers are stranded at bus stations in big cities as they are trying to get back to their respective home towns.

New Delhi, with a population of almost 20 million, will seal its land borders from early Monday, and close shops and private sector offices until March 31. 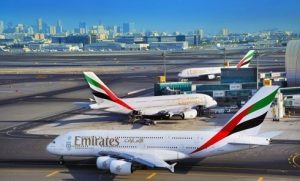 Other states imposed partial or full lockdowns, with many closing borders, restricting movement and halting most public transport. Some, like West Bengal, which has a population of more than 90 million, locked down major cities but not rural areas.

The Indian government on Monday announced to ground all domestic flights. Indian Railways, which carries more than 25 million commuters a day, cancelled all passenger train services until March 31.

Incoming international flights were already barred for a week, while schools, entertainment facilities and monuments such as the iconic Taj Mahal have been closed.

India has registered 417 cases of coronavirus, with seven deaths, according to the latest numbers reported in the media. 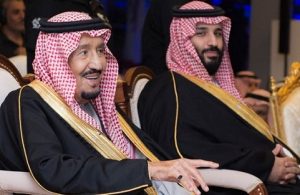 Saudi Arabia will impose a nationwide curfew from Monday evening, while the United Arab Emirates has announced the suspension of all passenger and transit flights as the coronavirus cases in the world continue to increase.

Saudi King Salman ordered a curfew to slow the spread of the coronavirus, state news agency SPA reported. The curfew will be enforced from 7pm to 6am for 21 days.

The United Arab Emirates (UAE), which has 153 reported coronavirus cases, said it will suspend all flights to and from the country for two weeks, state news agency WAM said on Monday, adding that cargo operations will continue.

The UAE’s Ministry of Health has decided to close shopping and commercial centres, leaving open pharmacies and supermarkets, along with fish, vegetables and meat markets dealing with wholesalers, WAM reported. It will limit restaurants to delivery services. 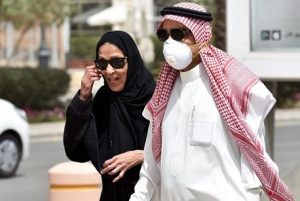 WAM said the closures will take effect in 48 hours and will last for two weeks, subject to review and evaluation.

The UAE has urged the public to stay at home except in cases of necessity, including getting supplies, such as food and medicine, or performing “essential jobs”, WAM said.

On Sunday, Saudi Arabia recorded 119 new cases of the virus for a total of 511, the highest number in the Gulf region, the Health Ministry said.

The tally of cases in the six-nation Gulf Cooperation Council now stands at more than 1,700.

In Bangladesh, there are 27 confirmed cases of the virus.

There have been two recorded deaths so far and more than 2,000 people are under home quarantine but people are scared their country may not be ready to handle the crisis. 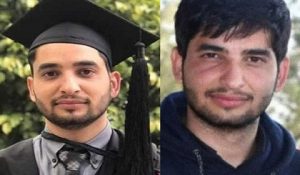 A young physician, Dr Osama Riaz, became the first Pakistani doctor who died of coronavirus which he had contracted while physically handling suspected COVID-19 patients returning to Gilgit-Baltistan from overseas and other parts of Pakistan.

Dr Osama was part of 10-member team of the doctors tasked with screening patients returning from downtowns, particularly those arriving there from Iran via Taftan. He later started providing services to the suspected patients in isolation centres established for them in Gilgit.

His colleagues told The News that Dr Osama ignored his health and served the patients till late night as the patients had never been provided any services before.

Dr Shah Zaman, a senior member of the Health Department and focal person of GB government for coronavirus, told The News by phone that he had personally met Dr Osama at 11pm on Thursday. 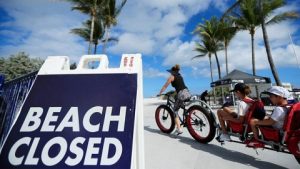 “After I met him at the screening centre, he later finished duty and went home. He was perfectly alright by that time and didn’t made any complaint but it was when his wife tried to awake him, he didn’t respond and when they checked, he was unconscious,” said Dr Shah Zaman.

Dr Osama was then shifted to the Provincial Headquarter Hospital (PHQ)in Gilgit city where he was put on ventilator. It was a big shock and surprise for the local authorities. They sent his swab for investigation that confirmed him as positive case.

Italy enters a tougher lockdown, with all “non-essential” businesses closed 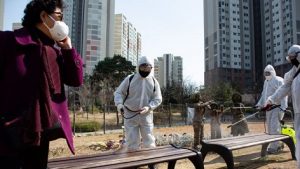 Passenger flights to Dubai International Airport are to be suspended

US President Donald Trump has ordered the deployment of National Guard troops in the three states hardest hit by the coronavirus outbreak.

Troops will be used in New York, California and Washington to deliver medical aid and set up medical stations after the number of deaths nationwide rose to 471 and infections to 35,244.

There are fears of a shortage of medical supplies in New York City.

A bill to fund national relief efforts has been blocked in the Senate.

Opposition Democrats want the emergency stimulus bill, which is worth 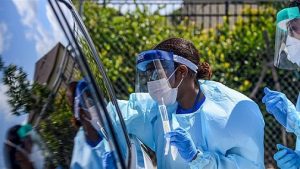 almost $1.4 trillion (£1.2 trillion), to include more money for state and local governments and hospitals, while Trump’s Republicans are pushing for quick action to reassure financial markets.

The country recorded 64 new cases of Covid-19 in the last 24 hours, taking the total to 8,961 with 111 deaths but health officials warn against complacency, saying the country still faces a long war against the infection.

Europe is currently at the centre of the pandemic.

2020-03-23
admin
Previous RANGA REDDY COLLECTOR AND CYBERABAD POLICE APPLAUDS THE EFFORTS OF HEROES IN THE STATE
Next DGP Warns Action Against Violators: Lockdown