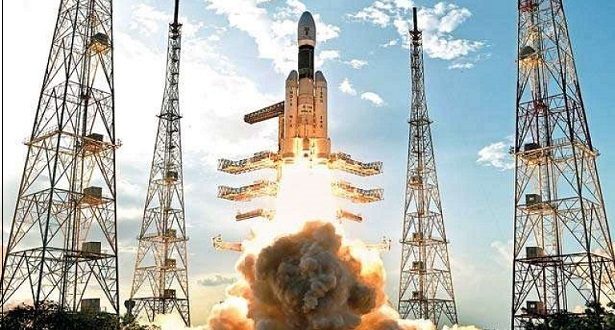 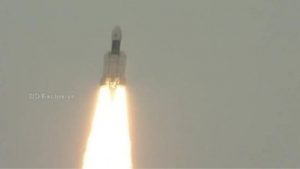 NEW DELHI: India has successfully launched its second lunar mission a week after it halted the scheduled blast-off due to a technical snag.

Chandrayaan-2 was launched at 14:43 local time (09:13 GMT) on Monday from the Sriharikota space station.

India’s space chief said his agency had “bounced back with flying colors” after the aborted first attempt.

The spacecraft has entered the Earth’s orbit, where it will stay for 23 days before it begins a series of manoeuvres that will take it into lunar orbit. 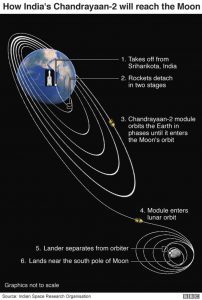 The lift-off was broadcast live on TV and the space agency’s official social media accounts.

There was applause in the Indian Space Research Organization (ISRO) control room minutes after the launch, as the rocket took off towards the outer atmosphere.

For the first time in India’s space history, an interplanetary expedition is being led by two women – Muthaya Vanitha, the project director, and Ritu Karidhal, the mission director.

It is the most complex mission ever attempted by India’s space agency.

“It is the beginning of a historical journey of India towards the moon,” said Isro chief K Sivan in a speech after the launch.

He thanked and congratulated the nearly 1,000 scientists, engineers and other staff who have worked on the mission: “It is my duty to salute all the people who have done the work.” 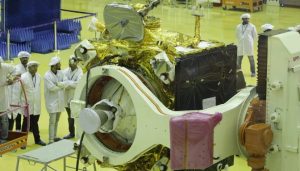 The countdown on 15 July was stopped 56 minutes before launch after a “technical snag was observed in [the] launch vehicle system”, according to Isro. Indian media have reported that a leak from a helium gas bottle in the cryogenic engine of the rocket was to blame.

The fuel from the rocket was drained and the scientists resolved the glitch.

“It was a simple to fix [but it was] a serious problem that could have resulted in total failure,” said a source at Isro.

What is this mission all about?

India’s first lunar mission in 2008 – Chandrayaan-1 – did not land on the lunar surface, but it carried out the first and most detailed search for water on the Moon using radars.

Chandrayaan-2 (Moon vehicle 2) will try to land near the little-explored south pole of the Moon. 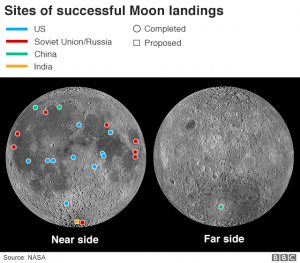 The mission will focus on the lunar surface, searching for water and minerals and measuring moonquakes, among other things.

India is using its most powerful rocket, the Geosynchronous Satellite Launch Vehicle Mark III (GSLV Mk-III), in this mission. It weighs 640 tones (almost 1.5 times the weight of a fully-loaded 747 jumbo jet) and at 44 meters (144ft) is as high as a 14-storey building.

The orbiter, which has a mission life of a year, will take images of the lunar surface. 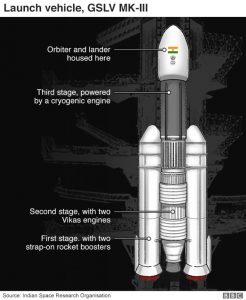 The lander (named Vikram, after the founder of Isro) weighs about half as much, and carries within its belly a 27kg Moon rover with instruments to analyse the lunar soil. In its 14-day life, the rover (called Pragyan – wisdom in Sanskrit) can travel up to a half a kilometre from the lander and will send data and images back to Earth for analysis.

How long is the journey to the Moon?

The launch is only the beginning of a 384,000km (239,000-mile) journey – Isro is still hoping the lander will touch down on the Moon on 6 or 7 September as planned, despite the week-long delay of the launch.

The journey of more than six weeks is a lot longer than the four days the Apollo 11 mission 50 years ago took to reach the Moon- and land humans on the lunar surface for the first time.

In order to save fuel, India’s space agency has chosen a circuitous route to take advantage of the Earth’s gravity, which will help slingshot the satellite towards the Moon. India does not have a rocket powerful enough to hurl Chandrayaan-2 on a direct path. In comparison, the Saturn V rocket used by the Apollo programme remains the largest and most powerful rocket ever built.

“There will be 15 terrifying minutes for scientists once the lander is released and is hurled towards the south pole of the Moon,” Dr Sivan said prior to the first launch attempt. 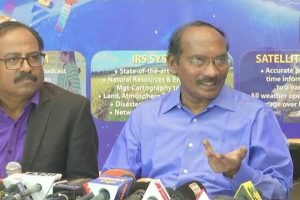 He explained that those who had been controlling the spacecraft until then would have no role to play in those crucial moments. The actual landing, he added, would be an autonomous operation dependent on all systems performing as they should. Otherwise, the lander could crash into the lunar surface.