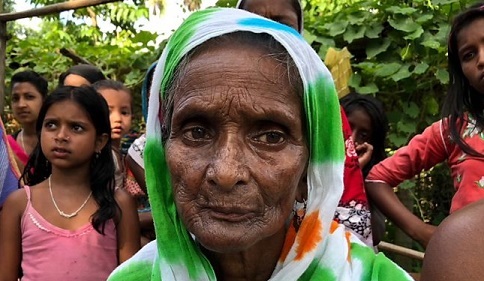 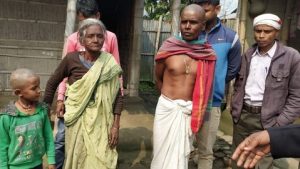 MELBOURNE/ NEW DELHI: India has published the final version of a list which effectively strips about 1.9 million people in the north-eastern state of Assam of their citizenship.

The National Register of Citizens (NRC) is a list of people who can prove they came to the state by 24 March 1971, the day before neighbouring Bangladesh declared independence from Pakistan.

People left off the list will have 120 days to appeal against their exclusion.

It is unclear what happens next.

It has already detained thousands of people suspected of being foreigners in temporary camps which are housed in the state’s prisons, but deportation is currently not an option for the country.

The process has also sparked criticism of “witch hunts” against Assam’s ethnic minorities.

What is the registry of citizens? 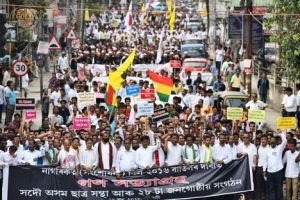 The NRC was created in 1951 to determine who was born in Assam and is therefore Indian, and who might be a migrant from neighbouring Bangladesh.

The register has been updated for the first time.

Families in the state have been required to provide documentation to show their lineage, with those who cannot prove their citizenship deemed illegal foreigners.

Prime Minister Narendra Modi’s Hindu nationalist Bharatiya Janata Party (BJP) has long railed against illegal immigration in India but has made the NRC a priority in recent years.

A small community centre in the village of Katajhar is being guarded by two members of the Indian army. Outside, a line of people wait. Some are clutching plastic bags containing documents.

As they enter one of two rooms, an official runs his eyes down a print-out to see if their names or photos are on it. This list – the National Register of Citizens – is one with huge consequences. And so there’s fear and trepidation as people here find out whether they’ve been included. 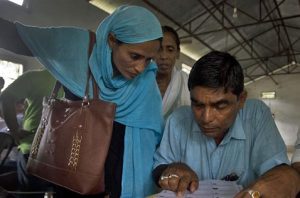 Many here who haven’t made it tell me it’s a mistake as they show me paperwork they say proves they belong in this country.

None of Asia Khatun’s family of nine made the list. They now have the chance to appeal but there’s real fear about what might come next. “I’d rather die than go to a detention centre,” she tells me. People here are angry but they’re also scared.

Why is the registry happening in Assam?

Assam is one India’s most multi-ethnic states. Questions of identity and citizenship have long vexed a vast number of people living there.

Among its residents are Bengali and Assamese-speaking Hindus, as well as a medley of tribespeople.

A third of the state’s 32 million residents are Muslims, the second-highest number after Indian-administered Kashmir. Many of them are descendants of immigrants who settled there under British rule but illegal migration from neighbouring Bangladesh, which shares a 4,000-km long border with India, has been a concern there for decades now. The government said in 2016 that an estimated 20 million illegal immigrants were living in India. 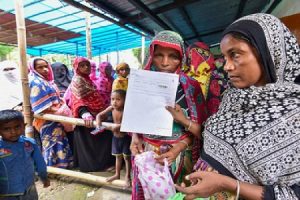 Not quite. Residents excluded from the list can appeal to the specially formed courts called Foreigners Tribunals, as well as the high court and Supreme Court.

However, a potentially long and exhaustive appeals process will mean that India’s already overburdened courts will be further clogged, and poor people left off the list will struggle to raise money to fight their cases.

If people lose their appeals in higher courts, they could be detained indefinitely.

Some 1,000 people declared as foreigners earlier are already lodged in six detention centres located in prisons. Mr Modi’s government is also building an exclusive detention centre, which can hold 3,000 detainees.

“People whose names are not on the final list are really anxious about what lies ahead. One of the reasons is that the Foreigners 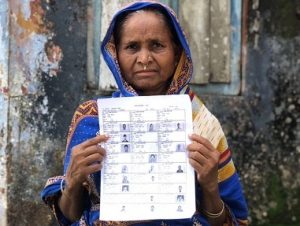 Tribunal does not have a good reputation, and many people are worried that they will have to go through this process,” Sangeeta Barooah Pisharoty, author of Assam: The Accord, The Discord, told the BBC.

Why have been the courts so controversial?

The special courts were first set up in 1964, and since then they have declared more than 100,000 people foreigners. They regularly identify “doubtful voters” or “illegal infiltrators” as foreigners to be deported but the workings of the specially formed Foreigners Tribunals, which have been hearing the contested cases, have been mired in controversy.

There are more than 200 such courts in Assam today, and their numbers are expected to go up to 1,000 by October. The majority of these tribunals were set up after the BJP came to power in 2014.

The courts have been accused of bias and their workings have often been opaque and riddled with inconsistencies. 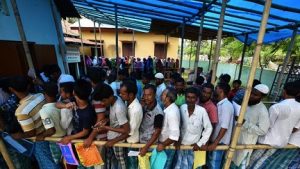 For one thing, the burden of proof is on the accused or the alleged foreigner.

For another, many families are unable to produce documents due to poor record-keeping, illiteracy or because they lack the money to file a legal claim.

People have been declared foreigners by the courts because of differences in spellings of names or ages in voter rolls, and problems in getting identity documents certified by authorities. Amnesty International has described the work by the special courts as “shoddy and lackadaisical”. 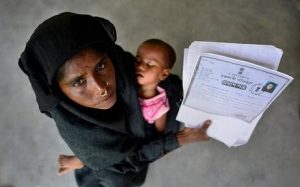 “The Foreigners Tribunal,” she says, “must be made more transparent and accountable.”

A decorated Indian army veteran, Muhammad Sanaullah spend 11 days in a detention camp in June after being declared a “foreigner”, prompting national outrage.

Both the citizen’s register and the tribunals have also sparked fears of a witch hunt against Assam’s ethnic minorities.

Have the minorities been targeted?

Many say the list has nothing to do with religion, but activists see it as targeting the state’s Bengali community, a large portion of whom are Muslims.

They also point to the plight of Rohingya Muslims in neighbouring Bangladesh.

However significant numbers of Bengali-speaking Hindus have also been left off the citizenship list, underscoring the communal and ethnic tensions in the state

“One of the communities worst affected by the list are the Bengali Hindus. There are as many of them in detention camps as Muslims. This is also the reason just days before NRC is to be published the BJP has changed tack, from taking credit for it to calling it error-ridden. That is because the Bengali Hindus are a strong voter base of the BJP,” says Barooah Pisharoty. 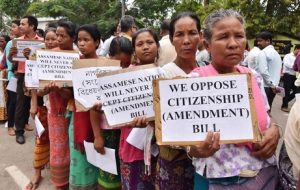 Fearing possible loss of citizenship and detention after exclusion from the list, scores of Bengali Hindus and Muslims have killed themselves since the process to update the citizen register started in 2015, activists say.

And in an echo of US President Donald Trump’s policy to separate undocumented parents and children, families have been similarly broken up in Assam.

Detainees have complained of poor living conditions and overcrowding in the detention centres.

One detainee told a rights group after his release he had been taken to a room which had a capacity for 40 people, but was filled with around 120 people. People who have been declared foreigners as well as many inmates have been suffering from depression. Children have also been detained with their parents.

Human rights activist Harsh Mander, who visited two detention centres, has spoken about a situation of “grave and extensive human distress and suffering”. 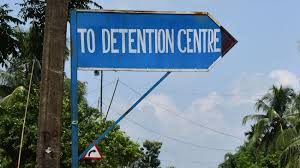 What happens to people who are declared foreigners?

The BJP which rules the state, has insisted in the past that illegal Muslim immigrants will be deported. But neighbouring Bangladesh will definitely not accede to such a request.

Many believe that India will end up creating the newest cohort of stateless people, raising the spectre of a homegrown crisis that will echo that of the Rohingya people who fled Myanmar for Bangladesh.

It is not clear whether the people stripped of their Indian citizenship will be able to access welfare or own property.

One possibility is that once they are released, they will be given work permits with some basic rights, but will not be allowed to vote.