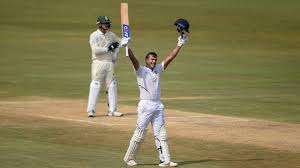 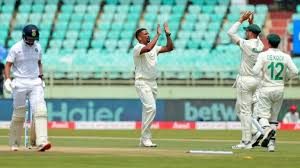 India declared their first innings at 502 for 7 against South Africa on the second day of the Visakhapatnam Test today.

The hosts had resumed play with openers Mayank Agarwal and Rohit Sharma.

They made 317 runs partnership, becoming the third Indian pair to post 300-plus opening stand.

Mayank made 215 becoming the first Indian opener since Virender Sehwag in 2009-10 to score a double century. Rohit scored 176, his fourth test century and first as an opener. With this, he has achieved an average of 98.22.

This average is the joint-best among all batsmen with 10-plus innings sharing the top spot with Don Bradman.

After declaring the innings India took three South African wickets for just 34 runs. Ravichandran Ashwin bagged two wickets and his fellow spinner Ravindra Jadeja took one as the visitors were 39 for 3 at stumps on Day 2 trailing by 463 runs.