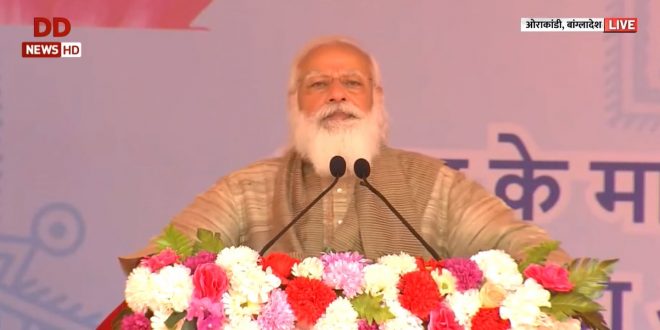 India and Bangladesh want to see stability, love and peace in world instead of instability, terror, and unrest, says, PM Modi

Prime Minister Narendra Modi today said, both India and Bangladesh want to see stability, love, and peace in the world instead of instability, terror, and unrest.

Addressing  Matua community in Orakandi, Bangladesh PM Modi said, both the nations want to see the world progressing through their own progress. He said, During Corona pandemic, India and Bangladesh have proven their capabilities.

Today both nations are facing this pandemic strongly and fighting it together.Mr.Modi said,  India consideres it its duty that Made in India vaccine reaches the citizens of Bangladesh.

Prime Minister performed pooja at the Jeshoreshwari Kali Shaktipeeth in Satkhira, which is one of the 51 Shaktipeeths in the Puranic tradition.

This structure would be used by the devotees during the Annual Kali Puja & Mela of the temple. It will be also useful for broader community of all faiths as a storm shelter & community facility.

PM Modi placed hand made Mukut on Ma Kali on this occasion. Mukut is made of silver with gold plating. Hand made over three weeks by a traditional artisan.

Prime Minister Modi reached at Tungipara, where he has laid a wreath to pay tribute to Bangabandhu Sheikh Mujibur Rahman.

PM Modi is the first ever foreign Head of State or Head of Government to pay homage at Bangabandhu Mausoleum Complex. Bangladesh Prime Minister Sheikh Hasina specially went to Tungipara to welcomePM Modi .

The leading English newspapers published from Dhaka and other major cities have published the news with colorful photographs of Prime Minister Modi and his Bangladeshi counterpart Sheikh Hasina.

The daily observer in its first page headline writes that Bangladesh India Unity a must to fight terrorism- Modi at Mujib Borsho celebrations. Daily has also published Prime Minister Modi’s photo with the background of Bangbandhu’s image.

Another Bangla daily- Bangladesh Pratidin has published the news of Prime Minister Modi’s visit with a photograph of handing over Gandhi Peace Prize to the younger daughter of Bangbandhu.