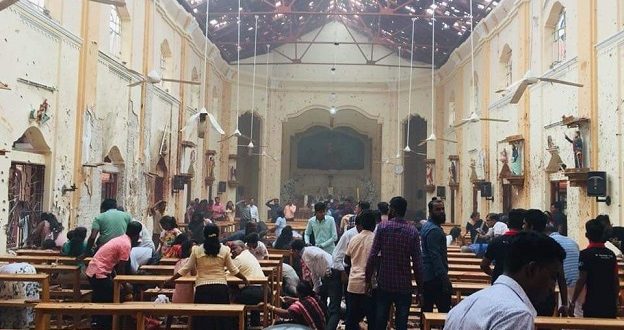 COLOMBO:  At least 138 people have been reported to be killed and hundreds more injured in a series of explosions targeting churches holding Easter services and hotels in Sri Lanka. PMI put the death toll at 160.

Most of the dead are believed to have been locals with the BBC putting the number of foreigners killed at nine, and PMI reporting that 35 people from other countries have lost their lives.The Guardian understands that British tourists are feared to be among those killed.

No one has claimed responsibility for the attacks but Sri Lanka’s Defence Minister, Ruwan Wijewardene, said the culprits had been identified and were religious extremists.An official told the Associated Press that two blasts were suspected to have been the work of suicide bombers.

The government has imposed a curfew with immediate effect, it also shut down social media and messaging services.

There were six initial blasts, at three hotels and three churches, before two more explosions sometime later, at a guest house and housing scheme, with two people, reported to have been killed at the former. Harsha de Silva, a government minister said the last two blasts appeared to have been carried out by the culprits as they fled from police.

The Prime Minister, Ranil Wickremesinghe, condemned the “cowardly” attacks and urged people to remain “united and strong”. He convened Sri Lanka‘s top military officials at an emergency meeting of the national security council.

The archbishop of Colombo, Cardinal Ranjith, called it “a very sad day” and urged them government to identify the attackers and “punish them mercilessly because only animals can behave like that”.

World leaders including Narendra Modi, Imran Khan, Theresa May, Donald Tusk, Jean-Claude Juncker and Vladimir Putin condemned the attacksand expressed their sympathies to the victims. May called the violence “truly appalling” and said that “no one should ever have to practise their faith in fear”.

British tourists are feared to be among the foreign nationals killed in the Easter Sunday bombings across  Sri Lanka.

Tourism from the UK to Sri Lanka has surged in recent years, with more than 250,000 visits by British holidaymakers in 2018, according to the high commission in London. The Embassy has set up an emergency hotline on 07917382486 for families and friends concerned about a loved one in Sri Lanka.

The curfew which was to have begun at 6 pm has now been imposed with immediate effect.