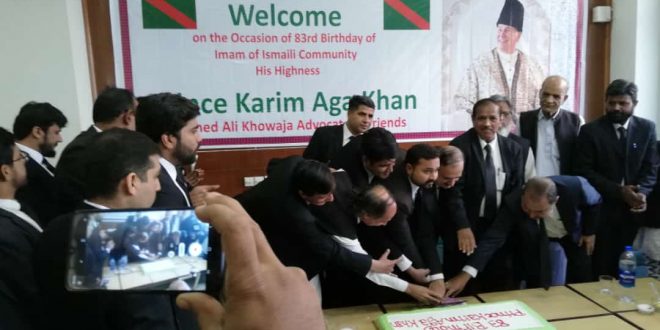 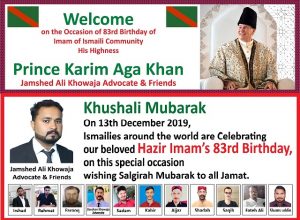 WASHINGTON/ GENEVA/ KARACHI: Ismailis around the world celebrating Mawlana Hazar Imam’s 83rd birthday — an occasion to reflect on the unique spiritual bond that links each murid to the Imam-of-the-Time.

Throughout history, Ismaili Muslims have been led by a living, hereditary Imam-of-the-Time descended from the progeny of Prophet Muhammad (peace be upon him and his family) through his cousin and son-in-law, Hazrat Ali-AS, and his daughter, Hazrat Bibi Fatima-SA.

On 13 December 2019, the global Jamat celebrates the 83rd birthday of their present living Imam, His Highness Prince Karim Aga Khan.

During over six decades of his Imamat, Mawlana Hazar Imam has devoted himself to the spiritual and worldly progress of Ismailis everywhere. Throughout this time, he has also been recognized as an influential and respected leader on the world stage, by virtue of his commitment to peace, hope, and upholding the dignity of humankind. 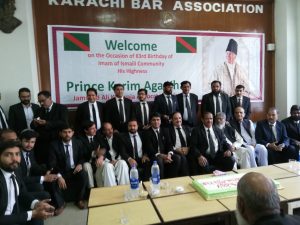 The celebration of Hazar Imam’s birthday is an occasion for Ismailis to reflect on the unique spiritual bond that links each murid to Hazar Imam. It also affords the Jamat an opportunity to express its love, loyalty, and devotion to the Imamat, which binds the Ismaili community together as one.

World’s most influential organization “International Lawyers Forum” (ILF) has also celebrated the 83rd birthday of their present living Imam, His Highness Prince Karim Aga Khan, Shah Karim Al-Hussaini on 13 December 2019, who was born in Geneva, Switzerland in 1936; he succeeded his grandfather to become the 49th Imam at the age of 20.

In continuation of this precious occasion, a large number of Prince’s followers and lovers also celebrated the birthday of their living Imam on Friday at Karachi Bar Association’s (KBA) premises which was arranged by ILF under the supervision of Jamshed Ali Khowaja Advocate with full spiritual and traditional aspects. 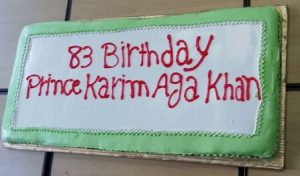 Hundreds of Lawyers were participated and enjoyed the cutting ceremony of 83 pound cake.

Prince’s birthday was marked by festivity and celebrations while the participants thanked their Imam for his continued guidance and support in religious and earthly matters.

The occasion started with especial prayers in which the lawyers prayed for the good health and long life of their Imam, and thanked him for his visionary leadership spanning over six decades. Prayers were also offered for the solidarity and prosperity of Pakistan, and wellbeing of the Islamic Ummah.