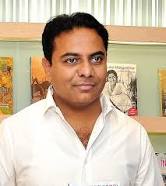 Hyderabad should set example in use of clay Ganesha idols: KTR

admin August 17, 2017 Hyderabad, Top News Comments Off on Hyderabad should set example in use of clay Ganesha idols: KTR 603 Views

Hyderabad:  IT & Municipal Administration Minister K. Tarakarama Rao today said through the distribution of eco-Ganesha idols and awareness program initiative,Hyderabad should set an example to other cities in promoting clay idols.

Speaking at the Eco-Ganesha idols’ distribution and awareness program, KTR said the idea to invite school and college students in the drive was to promote usage of clay idols among youngsters and continue the practice during the years to come. He also said over two lakh clay idols will be distributed to the citizens in the city to promote eco-friendly celebrations.

GHMC, HMDA and the Pollution Control Board will be setting up special stalls at different locations for distribution of clay idols. The locations and contact numbers will be declared shortly, he said, adding that the GHMC has constructed exclusive immersion ponds at different locations in the city. In all, 25 ponds are being constructed at a cost of Rs 22 crore to reduce pollution in the Hussain Sagar and other lakes and water bodies in the city.

In this connection, KTR appealed to the colony associations, NGOs and households to use clay idols to curb pollution and make Hyderabad a Pollution Free City. Later, KCR distributed a few idols with a sapling to students. A pledge has also been organized where all the Minister, officials and public representatives participated and took oath that everyone should feel the responsibility to use clay idols to control pollution in the near future.

After the program at Shilpakala Vedika, the Minister held a meeting with GHMC, HMDA and other departments on the double bedroom housing project.