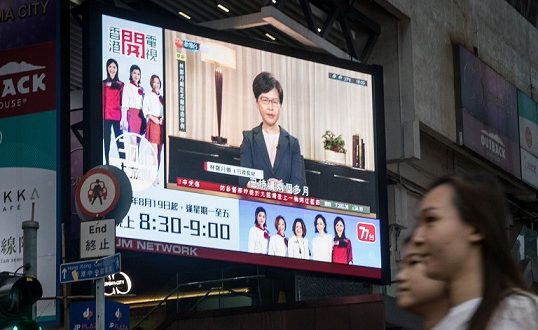 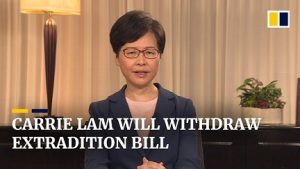 The proposal, introduced in April, would have allowed criminal suspects to be extradited to mainland China.

The bill was suspended in June when Ms Lam called it “dead”, but she stopped short of withdrawing it.

Full withdrawal is one of five key demands of protesters, who are also calling for full democratic rights.

In a televised address on Wednesday, Ms Lam also announced other measures that appeared to be designed to soothe unrest.

She said two senior officials would join an existing inquiry into police conduct during the protests. An independent investigation into alleged police brutality against protesters is another of the activists’ key demands. 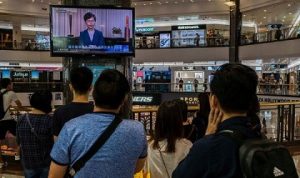 On Monday, Ms Lam was heard on leaked audio tapes blaming herself for igniting Hong Kong’s political crisis, and saying it was unforgiveable of her to have caused such huge havoc.

The extradition bill quickly drew criticism after being unveiled in April. Opponents said it would undermine Hong Kong’s legal freedoms and might be used to intimidate or silence critics of Beijing.

Hong Kong is now in its 14th successive week of demonstrations, and saw fresh violence between police and activists last weekend.

What did Carrie Lam say?

In the recorded message Ms Lam said the protests had “shocked and saddened the Hong Kong people” and the violence was “pushing Hong Kong towards a highly dangerous situation”.

“No matter what discontentment the people have towards the government or the society, violence is not the way to resolve problems,” she said. 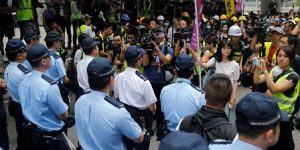 “Currently, stopping the violence is the top priority, maintaining the law and rebuilding the rules of society. The government will sternly tackle violence and illegal action.”

Ms Lam said she and other senior officials would visit communities in Hong Kong and talk to people directly about their concerns.

What reaction has there been?

“It won’t pacify everybody but hopefully it would clear remaining doubt in the minds of some of the peaceful protesters,” she said.

“The protests have been driven by a multitude of reasons including deep-rooted anger about Hong Kong’s widening wealth gap, housing conditions and political system. I am glad that the chief executive said that she would go to the district to enter direct dialogue with the people from all walks of life.”