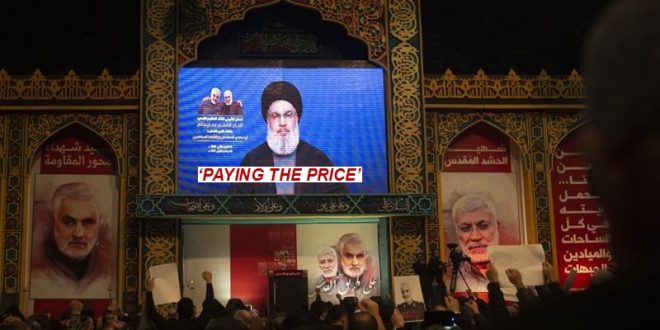 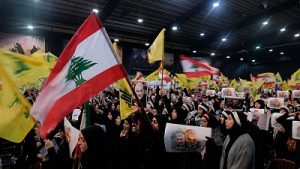 BEIRUT/ BAGHDAD/ DAMASCUS: Hassan Nasrallah, the Chief of Hezbollah has promised to target US forces in the region in retaliation for the martyrdom of top Iranian and Iraqi commanders in a United States (US) drone attack earlier this week.

On Friday, Qassem Soleimani, the commander of the Quds Force, an elite branch of Iran’s Islamic Revolutionary Guard Corps (IRGC), and Abu Mahdi al-Muhandis, the deputy leader of the Iraqi Popular Mobilisation Forces were killed.

“It is the American military who killed them and it is them who will pay the price,” Nasrallah said during a speech broadcast to a large crowd in Beirut’s southern suburbs, a support base of the Iran-backed group in Lebanon.

He said targets include “US military bases, soldiers, officers and warships”. 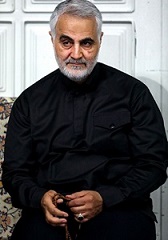 The Hezbollah leader’s voice was drowned out by chants of: “Death to America” as thousands of flag-waving supporters clad in black jumped to their feet and pumped their fists.

Nasrallah then added that civilians should not be singled out.
“Touching any civilian anywhere in the world would only serve (US President Donald Trump’s) policies,” but once Trump sees “the coffins of American soldiers and officers begin to return home” he would realize that “he has lost the region”, Nasrallah added.

Analysts say Nasrallah’s stance begins a new period of escalation and direct confrontation between Iran-backed militias in the region known as the “Resistance Axis” and the US military. 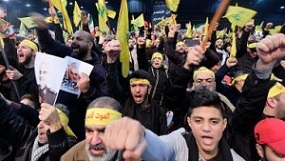 “The Americans have started a new kind of conflict that will last years,” Karim Makdisi, Chair of the Public Policy and International Affairs program at the American University off Beirut’s Issam Fares Institute, told PMI.

“There is now a clear, open mission for the Resistance Axis: Removal of all US bases from the region. Whether they can do that or not is a different question,” he added.
The scale of the regional response to Soleimani’s killing stems from his distinct role as a link between Iran-backed militias in the region, a role that saw him regularly shuttling between Beirut, Damascus and Tehran.

Soleimani’s special role, Nasrallah said during his speech, meant that his killing had to be viewed as an attack on the Resistance Axis as a whole, rather than just on Iran. 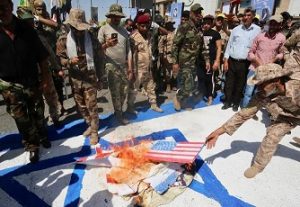 “It’s a moment of ‘you’ve declared war on us directly, not via Israel or another proxy’,” Makdisi said.

“So let’s cut out the middle man. They are not thinking in terms of Iraq or Syria or Lebanon. It is one nation that stretches a vast distance and needs to be liberated from American military occupation.”
Shortly after Nasrallah’s speech ended, Iraq’s Parliament ratified a non-binding decision to end the presence of all foreign troops in the country, a motion clearly aimed at the US forces.

Though largely symbolic, Makdisi said the decision put US legitimacy in the region on shakier ground.

“The US was never welcome in Syria and now its situation in Iraq is becoming more untenable,” he said.
Still, Sami Nader, director of the Levant Institute for Strategic Affairs, said no side wanted an all-out war.

Economic crises in Iran and in Iraq and Lebanon where it remains influential mean that open confrontation will not be likely, Nader said.
Right now, Iran needs to “save face” which it could do via a limited strike, “a firework” as Nader put it.
“This doesn’t mean that we can’t drift towards all-out war – there is definitely a threat. Often wars are caused by a course of events where escalation breeds more escalation.” 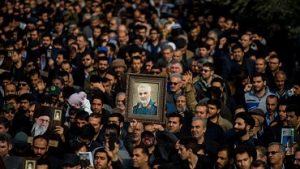 In Beirut’s southern suburbs, mourners who turned out for Nasrallah’s speech said they were now more ready than ever to take the confrontation to the US and to Israel, the latter of which occupied southern Lebanon for 18 years and fought several wars on Lebanese soil, the most recent in 2006.
Soleimani is reported to have played a commanding role in the 2006 war during which Hezbollah fought the Israelis which ended in a bitter deadlock.
“We lost a great commander who had a massive effect on the battles concerning Lebanon,” Hussein, a 27-year old employee at a sports store told media.

“I hope the response comes very quick. The only response I think fits the level of the martyrdom of Muhandis and Soleimani is the liberation of Palestine, nothing else,” he added. 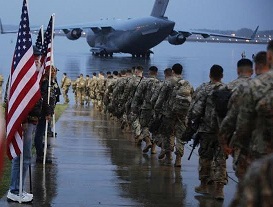 Holding a small picture of Soleimani, made glossy in the style of “martyrs”, Mohammad, a 50-year old factory worker, said the IRGC commander’s killing had succeeded in uniting those in the Resistance across the region.
“If a symbol of your nation was assaulted, what would you do – throw flowers at the enemy or establish a resistance to confront that enemy? All the Lebanese and those loyal in the region should join in with this existential battle,” Mohammad told media.
“Hezbollah does not just have 1,000, 2,000 or 10,000 in its ranks. After Soleimani’s death, the number is open. For Qassem, we have all become jihadis,” he added.

Soleimani’s killing comes as Lebanon and Iraq are mired in continuing protests against corruption and ruling parties which are seen as inept. 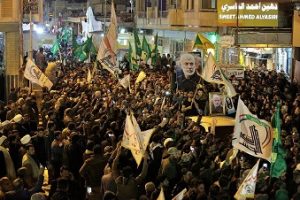 Anti-government protests in Iran late last year, sparked by fuel-price hikes, were violently suppressed.
While the protests in Lebanon and Iraq are not directed against Iranian influence, they have singled out local powers backed by Iran that are seen as having either participated in or covered for corruption.
In both countries, protesters have also repeatedly been attacked by supporters of Iran-backed groups.
Nader said the aftermath of Soleimani and al-Muhandis’ killings may prove to be the biggest attempt yet at a “counter-revolution” against uprisings in both countries.
At the same time, both states remain without fully functioning governments, after they resigned amid enormous protests. 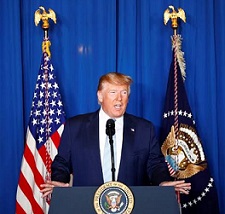 In Lebanon, Hezbollah and its allies, the Amal Movement and Free Patriotic Movement tasked former minister Hassan Diab with forming a new government on December 19.
Hezbollah had pledged that the new government would not have a confrontational position towards the West.
Hezbollah MP Walid Sukkarieh told media that this stance had not changed.

“There is a popular movement in the streets that says they want a technocratic government, and we agree,” he said.

“A government of confrontation would not help to rescue Lebanon from its dire economic situation, which we will need God’s help to do anyway.”