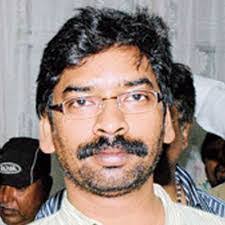 Hyderabad,  Former Chattisgarh chief minister Hemanth Soren today appreciated the TRS Government for its commitment towards the completion of irrigation projects, including the prestigious Kaleshwaram.

Hemanth Soren made a visit to the project site of Kaleshwaram, Medigadda barrage and others along with Irrigation Minister T Harish Rao and a team of officials. They took a helicopter to reach the site and Soren inspected the works of the Kaleshwaram project. Soren sought to know about the project and irrigation capacity and others. Harish Rao explained about the project, fixing of gates at the barrages, works in three shifts, involvement of thousands of engineers and officials and workers in three shifts for the speedy completion of Kaleshwaram with maps and details.

Taken by surprise at the speed of the works of the project, the former chief minister appreciated Chief Minister K Chandrasekhar Rao and Harish Rao for their persistent efforts for completing the projects. Expressing concern at the delay of the project during the past governments, Soren said that the KCR Government is spending huge funds for the projects. It is good to see that the projects are completed to ensure increase the agriculture productivity, he opined. While inspecting the works at Annaram barrage, Soren expressed pleasure at the commitment of the government. Use of technology and involvement of manpower is tremendous for the projects in Telangana, he said. He also hoped that the project will be completed on time and take steps for farmers welfare.