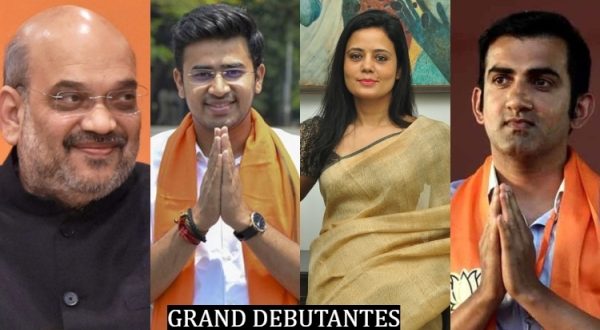 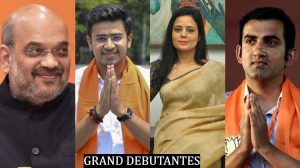 Hyderabad: As pollsters predicted, the Bharatiya Janata Party-led National Democratic Alliance won a landslide victory in the 17th Lok Sabha elections. The BJP won 303 seats according to the Election Commission of India and along with the NDA it won 352 seats out of the 542. The Congress bagged 52 seats.

This time a lot of MPs will make their political debut in the Parliament and some are already famous political figures. Have a look at the grand debutantes of the 2019 general elections:

BJP president and chairperson of the NDA, Amit Shah could be a first time MP but he is been dubbed as the master of the political theatre as she strategised the massive BJP win. Shah grew up in Mehsana in Gujarat to a son of Gujarati businessman.

Shah made his Lok Sabha debut contesting from Gandhinagar in Gujarat and won by 5.5 lakh+ votes. Congress candidate CJ Chavda was his opponent. Winning the prestigious seat, Shah smashed the earlier record margin of 4.83 lakh set by party patriarch L K Advani in the 2014 general election. He is now expected to resign as Rajya Sabha member from Gujarat.

He joined the RSS at a young age. Shah got associated with the BJP in 1986 and won his first seat in the state Assembly in 1997, at the age of 33. He served as an MLA for 20 years and became the Home Minister of Gujarat before he was finally nominated to the Rajya Sabha in 2017.

The duo of Modi-Shah saw the rise of BJP in Gujarat and eventually the whole of India.

Jothimani S from the Lok Sabha constituency in Karur is the only woman MP from the Congress party in Tamil Nadu. She defeated four-time MP and Deputy Speaker of Lok Sabha M Thambidurai with a margin of 4,20,546 votes. This is a significant victory, since she had also fought against Thambidurai in the 2014 general election and lost.

Daughter of a farmer in Karur district’s Periya Thirumangalam village, the 43-year-old author is known for her short stories.

Tejasvi, 28, is BJP’s youngest MP. Surya won the prestigious Bangalore South Constituency by a huge margin of 3,31,192 votes against Congress’ B K Hariprasad.

Surya is the nephew of BJP lawmaker Ravi Subramanya. Surya is also the state general secretary for the Karnataka BJP’s youth wing and also a party spokesperson. He also heads the BJP Karnataka IT Cell.

A 2011 World Cup winner, cricketer Gautam Gambhir won as a BJP candidate from the East Delhi Lok Sabha seat. He made a smashing start to his political career with 55.3 per cent votes or 6,96,156 votes.

The seat saw bitter contentious campaign between Gambhir and his rival Atishi Marlena of the Aam Aadmi Party. Marlena who won a distanced third had accused the cricketer of spreading a derogatory pamphlet about her, a claim that Gambhir has denied.

An investment banker by profession, Mahua Moitra won the rural Krishnanagar constituency in Nadia district defeating her BJP opponent ormer footballer Kalyan Chaubey – by a margin of more than 65,000 votes.

She is a spokesperson and general secretary of the Trinamool Congress.

She shot to national media when she showed a middle finger to Arnab Goswami while during a debate when he was working in Times Now.

Moitra claims she had an interest in politics since she was 18. She briefly joined the Congress in 2008 and moved to the Trinamool Congress in 2010. In 2016, she won the Karimpur Assembly seat in Nadia district.

A Punjabi sufi singer, Has Raj won the North West Delhi seat by a margin of more than five lakh votes. He replaced Udit Raj at the last moment, who left the party and joined the Congress.

While the singer will enter Parliament for the first time, he has been politically ambitious. In 2009, he contested Lok Sabha elections from Jalandhar, Punjab on a Shiromani Akali Dal ticket, but was defeated. After he resigned from the party in 2014, he joined Congress in 2016 and jumped to BJP later that year.

Ramya Haridas won the Alathur Lok Sabha constituency by over one lakh votes defeating two-time incumbent PK Biju in a constituency known as a citadel of the Communist Party of India (Marxist).

She is the only woman elected to Lok Sabha from Kerala in 2019 and the second Dalit woman MP from Kerala.

Haridas adopted a unique way of campaigning in the elections. Not only she has excellent oratory skills, she frequently sang folk songs while interacting with voters