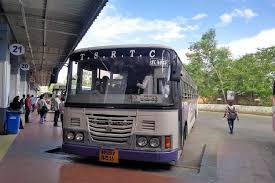 Govt urges RTC union leaders not to go on strike

Hyderabad, Oct.4 (PMI): The State government today asked the TSRTC trade unions and employees not to begin strike from Saturday as it will cause a lot of inconvenience to general public. The strike seems to be unavoidable from October 5 as there was no breakthrough in the talks by the government and RTC unions and staff.
A three-member committee headed by Principal secretary Somesh Kumar and RTC MD Sunil Sharma held talks with leaders of the unions and staff which failed to resolve the issue. Somesh Kumar warned to dismiss the staff if they participate in the proposed strike which is against the law. 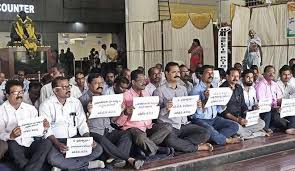 In the public interest, the employees should resume duties and ply buses, he said. He also admitted that the RTC was incurring losses and the government gave less funds to it against the budget allocations. While the previous government in the combined State earmarked about Rs 1,495 crore to the TSRTC, the present regime has so far offered only Rs 3,303 crore to it, he informed.
The State government was ready to address the RTC employees’ issues by taking some time and the staff should call off the strike. The committee will study the problems of the RTC and give a report to the government, he said, adding that they were making alternative arrangements for running about 22,000 private and school buses for public from Saturday. They also asked the private operators not to burden people by collecting more amount from them during the RTC strike.