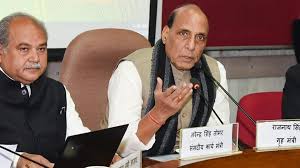 Govt has given free hand to Security Forces to deal with terrorists: Rajnath Sing

H ome Minister Rajnath Singh has said that government has given a free hand to the Security Forces to deal with terrorists and their perpetrators.

Mr Singh said this during the all-party meeting which was convened in New Delhi following terror attack in Pulwama district of Jammu and Kashmir.

He said, the government has followed a policy of zero tolerance against terrorism from the beginning and the cowardly attack on CRPF personnel reflects desperation among terrorists.

The Minister briefed the political parties about his visit to Srinagar yesterday and said, the morale of the Security Forces is high and they expressed resolve to continue the fight against terrorism till its logical conclusion.

The Home Minister said, a vast majority of people of Jammu and Kashmir are peace-loving but there are certain elements in the state who are in league with the terrorist groups operating from across the border.

He said, the sacrifices made by the Security Forces will not go in vain and the country is united in its fight against terrorism.

The Minister said, government is determined to root out terrorism from the soil. Mr Singh said this meeting has sent a message to the global community that the country, from Kashmir to Kanyakumari, speaks in one voice on matters of national interest. He said the Centre will provide all possible assistance to the families of martyrs.