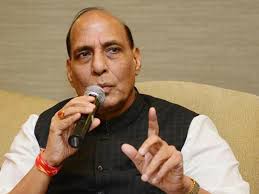 The Centre has allocated funds for the purchase of bullet-proof vehicles for the personnel of the Jammu and Kashmir Police. Union Home Minister Rajnath Singh said this during his interaction with police officials in south Kashmir’s Anantnag district today on the second day of his 4-day visit to the state.
The announcement comes in the wake of the killing of six police personnel, including an SHO, in Achabal area of Anantnag in June. The SHO had reportedly requisitioned a bullet-proof vehicle in view of the danger posed by terrorists, but was not provided one.
The Union Home Minister also said, the Centre has approved funds for opening a trauma centre for police personnel and lauded them for working in challenging conditions in the Valley.
Mr Singh will interact with CRPF personnel in Anantnag and is scheduled to chair a security review meeting in Srinagar later in the day.
Post Views: 288
Share
Previous Sunni scholar raps KSA’s silence over crimes in ‌Myanmar
Next Assam: flash floods submerge Balipara area in Sonitpur district