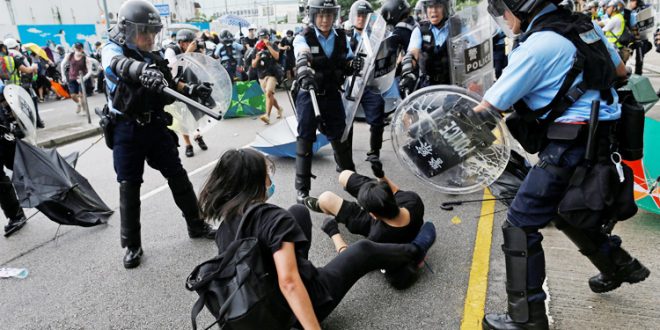 HONG KONG: Thousands of protesters faced off with riot police early on Monday, the anniversary of Hong Kong’s return to Chinese rule, ahead of an annual rally that is expected to draw huge crowds amid widespread anger over a controversial extradition bill.

More than a million people have taken to the streets at times over the past three weeks to vent their anger and frustration at Hong Kong’s Beijing-backed leader Carrie Lam, posing the greatest popular challenge to Chinese leader Xi Jinping since he came to power in 2012.

Opponents of the now-suspended extradition bill, which would allow people to be sent to mainland China for trial in courts controlled by the Communist Party, fear it is a threat to Hong Kong’s much-cherished rule of law and are demanding it be scrapped and Lam step down. 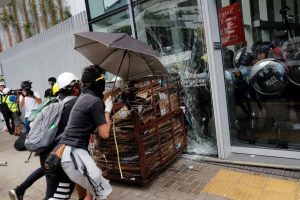 Police fired pepper spray to disperse some demonstrators, mostly black-clad students wearing hard hats and face masks, ahead of a flag-raising ceremony to mark the 22nd anniversary of Hong Kong’s handover from British to Chinese rule.

Riot police with helmets and batons raced towards protesters at one point and held up red banners warning they would use force if the activists charged.

A tired-looking Lam appeared in public for the first time in nearly two weeks to attend the anniversary ceremony, flanked by her husband and former Hong Kong leader Tung Chee-hwa. Authorities deployed a huge security blanket around the venue.

Lam said the government needed to change its style of governance to be more accommodating and open and pledged to do more for young people.

“The incident that happened in recent months has led to controversies and disputes between the public and the government. This has made me fully realise that I, as a politician, have to remind myself all the time of the need to grasp public sentiments accurately,” Lam said.

“After this incident, I will learn the lesson and ensure that the government’s future work will be closer and more responsive to the aspirations, sentiments and opinions of the community,” she said. 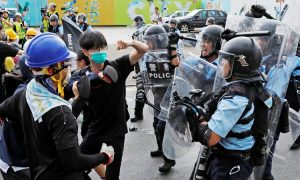 The anniversary of the handover of the former British colony to Beijing in 1997 has been marked in recent years by deepening despondency about what many Hong Kong residents see as a relentless march towards mainland control.

Tensions spiralled on June 12 when police fired rubber bullets and tear gas at anti-extradition protesters near the heart of the financial centre, sending plumes of smoke billowing among some of the world’s tallest skyscrapers.

Lam’s suspension of the bill, following the largest and most violent protests in decades, has done little to pacify opponents who are demanding it be scrapped altogether.

The extradition law has hit a nerve across Hong Kong, drawing criticism from business people, legal circles, schools and church groups, and has plunged the Asian financial centre into political turmoil. 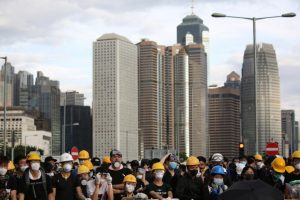 Hong Kong returned to Chinese rule under a “one country, two systems” formula that allows freedoms not enjoyed in mainland China, including freedom of protest and a much-cherished independent judiciary.

Beijing denies interfering but, for many Hong Kong residents, the extradition bill is the latest step in a relentless march towards mainland control.

The uproar over the bill has reignited a protest movement that had lost steam after pro-democracy demonstrations in 2014 failed to force concessions from Beijing and led to the arrests of hundreds of activists.

Organisers of the recent protests say they are confident that anger over the government’s failure to withdraw the extradition bill will boost numbers at the annual rally on Monday, a public holiday on which financial markets and most businesses will be closed.

The pro-democracy rally is due to start at 0630 GMT in Victoria Park on Hong Kong island and end at government offices near the heart of the financial centre. 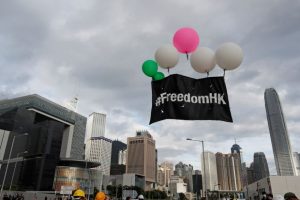 The recent demonstrations have brought havoc, forcing the closure of government offices on several occasions and triggering chaos as protesters blocked roads and besieged police headquarters.

The South China Morning Post cited unidentified sources as saying about 5,000 riot police would be ready for any trouble.

The turmoil comes at a delicate time for Beijing, which is grappling with a trade dispute with the United States, a faltering economy and tensions in the South China Sea.

Lam said after suspending the bill she had heard the people “loud and clear.” However, she stopped short of activists’ demands to scrap the bill altogether and rejected calls to step down. 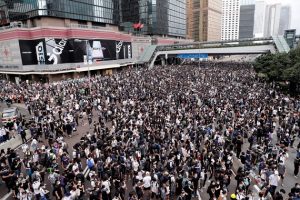 She is clinging to her job despite an unprecedented backlash against the government that has galvanised people from all walks of life to take to the streets in protest.

Activists are also demanding the government drop charges against those arrested during the protests, charge police with what they describe as excessive use of force and stop referring to the demonstrations as a riot, a term that can bring a heavier jail sentence.

Opponents of the extradition bill fear it would put them at the mercy of China’s justice system, where human rights are not guaranteed.

Beyond the public outcry, the extradition bill has spooked some of Hong Kong’s tycoons into starting to move their personal wealth offshore, according to financial advisers, bankers and lawyers familiar with the details.