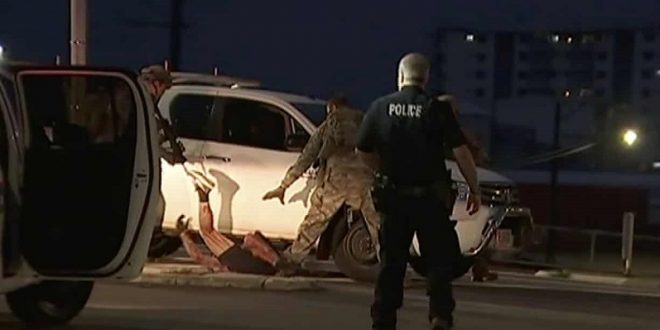 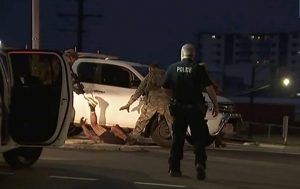 DARWIN/ MELBOURNE: NT Police say four people have died and many more have been injured in a shooting at multiple locations in Darwin.

The suspected gunman, aged 45, has been arrested and the ABC understands he was recently released from prison.

It is just for the record and info that Messenger has already been predicted about this terror incident.

Police said in a statement there were “currently four casualties, multiple injuries and multiple crime scenes”, but added they did not believe the incident to be terror related. 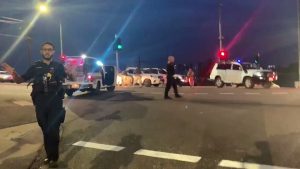 Witnesses say the man walked into the Palms Motel on McMinn Street in the suburb of Woolner while holding a pump-action shotgun and shot at multiple doors.

Multiple witnesses said he was looking for someone called “Alex”.

“He shot up every room in that place,” one man said.

“He got what he wanted and then he left in his pick-up.

Another witness said he saw the shooter walking calmly though the motel.

“Cops went straight past him, didn’t know who he was, he was that calm,” he said. 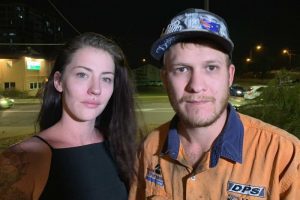 The gunman then fled the scene and remained at large for approximately an hour, with road blocks in place around the city.

ABC reporter Stephanie Zillman was at the scene.

“We witnessed ourselves… the alleged gunman being tackled to the ground by the tactical response group police and being tasered at the scene,” she said.

“Scenes like this certainly don’t happen in Darwin. It’s a sleepy tightknit community … so to see such dramatic scenes unfolding in Darwin CBD was truly extraordinary.”

NT Health said two people were at the Royal Darwin Hospital in a stable condition.

There is a second crime scene on Gardens Hill Crescent outside the city centre, where residents say a man was shot in the head.

Prime Minister Scott Morrison, who is in London ahead of D-Day commemorations, condemned the “terrible act of violence” and said he had spoken on the phone with NT Chief Minister Michael Gunner.

“I want to extend my deep condolences and sympathy to all the people in the Territory, particularly in Darwin,” Morrison said. 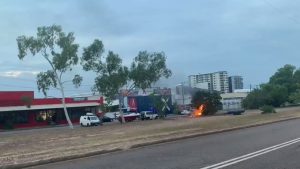 “This is a very tight community and I know they will be rocked by these events.”

Jasmine Kielly and her partner Brendon Ozanne moved to Darwin a week ago from Brisbane and were staying at the Palms Motel.

“As I’ve gone down towards the stairs I saw a man in a high-vis shirt walk out with a rifle,” she told the ABC.

“He’s turned to look at me and I’ve run to the bedroom and locked the door and we hid in the bathroom and we called the police and just heard shot after shot after shot.”

She and her partner hid in the shower for about 40 minutes.

“We heard him walk up the stairs at one point and I kind of just thought that was it,” Ms Kielly said.

“He went straight for the back office first and that’s where most of the shots were.

Kielly said at one point the shooter “had a pretty good shot if he wanted to hit me”.

She said the gunman had apparently been staying at the motel but had recently been kicked out by the owners.

Witness Leah Potter said a woman was shot in the legs at the Palms Motel before being taken away by an ambulance.

“I was in the car-park (of a neighboring hotel) when I heard what I thought were fireworks going off, really loud cracking, banging fireworks,” she said.

“And then a man came running with a woman in his arms from next door which is the Palms Motel, which is the motel next to my motel, and he just dropped her on the footpath right in front of us.

“I ran and got some towels and wrapped up her legs, she had little holes all in her skin on both her legs and she was bleeding everywhere.”

Potter said police were across the road at a Coles Express service station for another matter, “so the boyfriend dropped the bleeding woman in front of us and he ran over to the Coles Express to get the police”.

She said the gunman had a pump-action shotgun and ran off down Finniss St towards The Gardens.

“There was lots of blood. She was crying but she was pretty quiet … I think maybe she was in a bit of shock.”

Witness Matt James said the woman’s boyfriend “told me he opened his door and there was this random gunman standing there who proceeded to unload his rounds on her”.

Another witness, John Rose, said he saw the gunman walk into the Palms Motel with “a sawn-off shotgun”.

“He shot up all the rooms and he went to every room looking for somebody and he shot them all up, then we saw him rush out, jump into his Toyota pick-up, and rush off.”

He said the gunman was calm as he shot up the motel.

“Once he left we went in and found one gentleman, he’s over there, we pulled him out,” Rose said.

“This lady turned up and started screaming, and we didn’t realize there was another person in there… apparently he’s dead, he’s been shot.”

A witness who identified himself as Peter said he was having a few drinks at the nearby Frontier Hotel with a friend when they heard the gunshots.