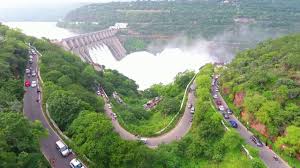 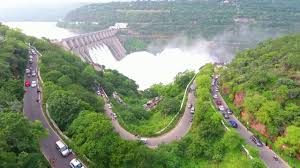 Srisailam, Aug.9 (PMI): Four sluice gates of Srisailam reservoir were lifted this evening as the flood water reached full level of the project. The gates were opened amidst the festival atmosphere and reveling visitors.
As the reservoir gates were lifted for the first time in the current season, AP Minister Anil Kumar Yadav and Telangana ministers Niranjan Reddy and Srinivas Goud performed pujas to river Goddess Krishnamma. After pujas, Anil Kumar Yadav lifted the sluice gates releasing water downstream. With this, the River Krishna was running towards the Nagarjuna Sagar project. The excited tourists, who thronged the project site, were seen shooting pictures of the flooding water.
The reservoir authoties said they lifted the four gates to release one lakh cusecs of water. At first, the gate no. 6 was lifted followed by gates 7, 8 and 9. Each gate released 25 cusecs of water downstream. It may be mentioned here that with incessant rains upstream, the flood waters touched maximum water level in the reservoir. While the full water level in the reservoir was 885 feet, the water level crossed 880 feet. While the full capacity of the reservoir is 215.81 tmc, presently, the reservoir has 189.89 tmc. (PMI)