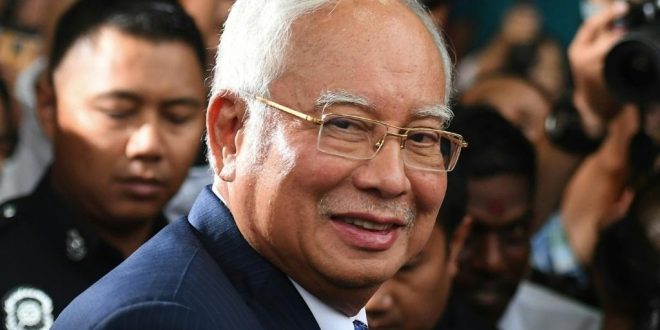 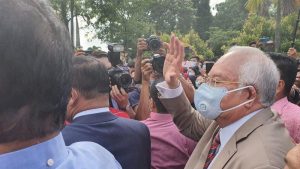 Judge Mohd Nazlan Ghazali found the prosecution had successfully made its case for abuse of power, criminal breach of trust and money-laundering charges by Najib related to the receipt of 42 million ringitt ($13.8 million) from 1MDB subsidiary SRC International.

After hearing mitigation applications from Najib’s lawyers, a response from the prosecution and a brief statement from Najib, Judge Nazlam read out the sentences: 12 years jail and a 210 million ringitt fine for abuse of power and 10 years jail for each count of criminal breach of trust and money laundering. All the sentences will run concurrently meaning 12 years in total plus another five years if the fine is not paid.

Najib has indicated he will appeal. 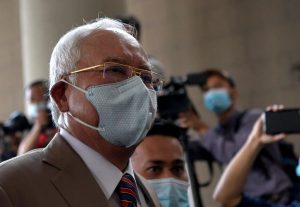 After the verdict, a request by Najib’s lawyer Shafee Abdullah for a stay in proceedings until Monday was refused.

Judge Nazlan ordered the defence to move directly to mitigation. Shafee then told the court his client had gone through a series of punishments already and that if he was at fault, it was only of “trusting the people that ought to run the company both at 1MDB and SRC” but prosecutor Datuk V Sithambaram on Tuesday night said the sentence must also be a deterrent. “Corruption is widespread in this country and must not be tolerated. Punishment must be paramount.”

The guilty verdict is a huge boost for anti-corruption crusaders around the country and its impact on Malaysia’s complex and fluid national politics will play out for years. In the near term, though, observers say, it could assist Najib’s party, which is already well on its way to clawing back power after an historic election defeat in 2018.

Najib ruled Malaysia from 2009 to 2018 and helped co-found 1MDB. The objective was to attract foreign investment and help lay the foundation for generations of prosperity. Instead, billions of dollars were siphoned off in what then 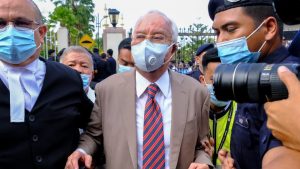 US Attorney-General Jeff Sessions in 2017 described as “kleptocracy at its worst”. The Malaysian people will be paying off related debts for years.

No proof of Saudi donations

During the SRC trial, Najib’s lawyers told the court the former prime minister believed the $13.8 million that landed in his account came from the Saudi royal family and he had been misled by Malaysian financier Jho Low and others involved with 1MDB. Low has continually denied any wrongdoing and maintains his innocence.

Judge Nazlan rejected this defence, noting there was no proof of any donations from the Saudi government and no mention of such by the late King Abdullah. 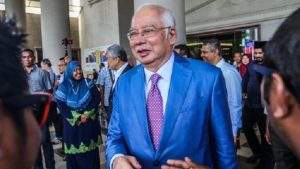 “In my view, even at this juncture, when the accused was told of the impending donation from Jho Low, the accused should have taken steps to verify and adduce proof of the information,” Judge Nazlan said.

“There were no details about the donations or whether it would come with conditions. Is it foreign aid, a grant or a loan? The accused could have picked up his mobile and communicated especially with his foreign affairs minister or the Saudi ambassador. Instead the accused, as PM, accepted a simple confirmation from Jho Low.”

Najib faces dozens of other charges related to the alleged theft of $US4.5 billion ($6.3 billion) from 1MDB. The stink and sheer scale of the scandal helped sweep him from power in May 2018. The election result was a historic defeat for his United Malaysia National Organisation party and a victory for veteran leader Mahathir Mohamad’s Pakatan Harapan coalition.

The verdict drew a predictably mixed reaction. Najib’s vocal supporters were downcast, while MPs who had campaigned for his prosecution were jubilant. 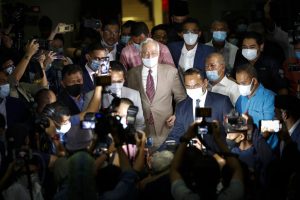 Awang Azman Awang Pawi from the University of Malaya noted the verdict would aid the current ruling alliance, but was also unlikely to damage Najib’s considerable support and influence among conservative Malays.

“The finding will boost the popularity of Muhyiddin as prime minister because he has managed to prove justice was blind under his rule but if the Muafakat Nasional (UMNO and the Pan-Malaysian Islamic Party) wins the next election, then UMNO will appoint the prime minister from within UMNO,” Awang said.

Since his fall from power, 95-year-old Dr Mahathir’s various plans to topple Muhyiddin have failed, but he continues to weigh in. As the court prepared to deliver his verdict, Dr Mahathir castigated the government for the settlement reached with Goldman Sachs last week for the investment bank’s role in helping to raise funds for 1MDB.

Dr Mahathir tweeted: “The total amount that should be due is $US6.9 billion. What Goldman Sachs has agreed to pay is $US2.5 billion. That is very much less than they should pay.” (Int’l Monitoring Desk)