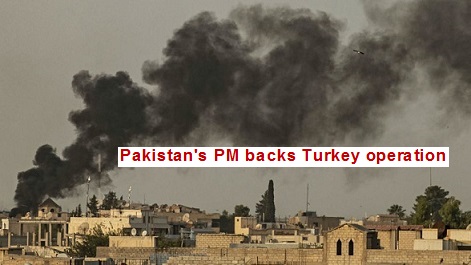 Independent sources claimed that hundreds of female Kurdish female fighters have been martyred in dozens of Turkish air and other strikes and attacks during the last 62 hours whereas over 70,000 more Syrians have displaced and become refugees while the Turkish forces announced that they have killed at least 342 Kurdish fighters in a major military operation in northeast Syria, now in its third day. 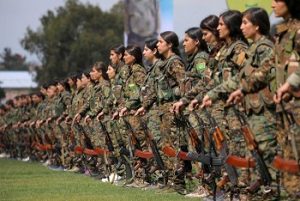 President Recep Tayyip Erdogan says the offensive is aimed at removing Kurdish-led forces from the border area and creating a “safe zone” so millions of Syrian refugees can be returned.

The move came after the United States announced it was withdrawing its troops from the region, leaving the Syrian Democratic Forces (SDF), its main ally in the battle against the Islamic State of Iraq and the Levant (ISIL or ISIS) armed group, without US military support.

Turkey’s defence ministry confirmed the first fatality among Turkey’s soldiers on Friday, while heavy clashes between Turkish forces and the SDF are under way in the Syrian border towns.

Al Jazeera’s Zeina Khodr, reporting from the Turkish border town of Akcakale, said the Turkish military was engaged in a fierce fight with the SDF as they battle for control of the town of Tel Abyad on the Syrian side of the frontier.

“The Turkish military is using heavy fire power – air strikes, artillery shelling, as well as rocket fire. The town of Tel Abyad is empty. The SDF has been firing rockets into Turkish border towns, like this one, Akcakale. A short while ago, two Turkish nationals were killed in a town nearby. Suruc. So a total of eight Turkish nationals killed in rocket fire emanating from Syria.

“The Turkish military seems to be concentrating their offensive in one area. In a strip of territory, 120 km along the border, 30 km deep – they say this is the initial phase of their operation. At the moment, its hard to say whether or not the scope of operations will widen.”

The autonomous Kurdish administration in northeast Syria it started evacuating a camp housing 7,000 displaced people to protect them from Turkish shelling.

The Mabroka camp, which lies 12km (seven miles) south of the border, was hit by shelling “which posed a direct threat to the lives of more than 7,000 displaced people,” a statement said. 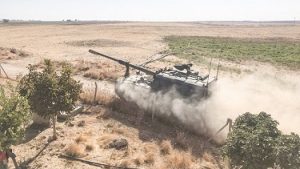 The civilians are due to be transferred to a camp known as Arisha, which is located further south in a region that has not been targeted by Turkey.

A Pakistani government statement said Khan called Erdogan to express “support and solidarity”. He told the Turkish president that “Pakistan fully understands Turkey’s concerns relating to terrorism” as it has lost 40,000 people in acts of terrorism in recent years.

Khan said he is praying that “Turkey’s efforts for enhanced security, regional stability and peaceful resolution of the Syrian situation are fully successful”.

Erdogan is due to visit Pakistan later this month.

The World Food Programme (WFP) said that more than 70,000 people have already fled the escalating violence since Turkey launched its military operation into northern Syria on Wednesday. 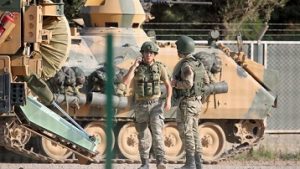 The mass displacement occurred in the Al-Hasakeh and Al-Raqqa provinces, a spokesman for the United Nations’ agency said in Geneva.

He reminded the warring parties that the UN requires access to 650,000 people in northeast Syria who rely on food aid.

At least four Syrian rebel allies of the Turkish army have been killed in an ambush by the Kurdish-led Syrian Democratic Forces (SDF) in northern Syria, Anadolu Agency reported.

The agency said the ambush took place in the Dadat village in the district of Tal Abyad, one of the Syrian border towns.

A total of 342 fighters from the Kurdish-led Syrian Democratic Forces (SDF) have been “neutralised” since the start of Turkey’s military operation in northern Syria, Turkey’ defence minister said on Friday.

Hulusi Akar’s comments came after his meeting with top military officials in Turkey’s capital Ankara, where he said “every kind of measures have been taken” in operation areas. 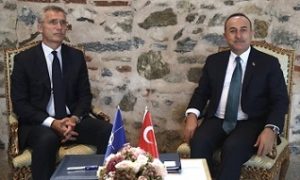 “We give the utmost importance to not only the security of our country and people, but also to the ethnic groups – Kurdish, Arabic, Assyrian, Christian, Ezidis and Keldani people – as well,” he said.

Meanwhile, the SDF said 22 of its fighters were killed on Wednesday and Thursday by Turkey and Syrian rebel allies.

Russian President Vladimir Putin said Turkey’s military operation in Syria could lead to the revival of the ISIL group in the region.

“I’m not sure whether the Turkish army will be able to take this under control – and how soon,” Putin said in televised remarks on a visit to Turkmenistan. “This is a real threat to us.”

“How will they be moving and to where?” he asked of the ISIL fighters. “Through Turkish territory? Through other territories?” 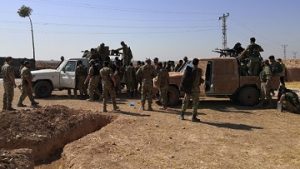 “We should simply understand this, know and mobilise the resources of our security services to neutralise this emerging new threat,” he added, without giving more detail.

European Council President Donald Tusk has condemned as attempted “blackmail” Friday a threat by the Turkish president to allow millions of refuges to head to Europe if the bloc criticizes Ankara’s offensive in Syria.

“Turkey must understand that our main concern is that their actions may lead to another humanitarian catastrophe, which would be unacceptable,” Tusk said on a visit to European Union member Cyprus.

“Nor will we ever accept that refugees are weaponised and used to blackmail us. That is why I consider yesterday’s threats made by President Erdogan totally out of place,” he added.

Under a 2016 agreement with the EU, Turkey agreed to prevent refugees from leaving towards Europe in exchange for six billion euros ($6.63bn) and visa-free travel for its citizens, but has frequently criticised the lack of assistance from Brussels. 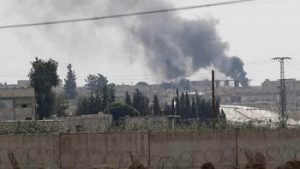 The Turkish military campaign in northeast Syria has displaced civilians and led to the closure of some main hospitals there, the medical charity Doctors Without Borders (MSF) says.

“With healthcare services already struggling to meet the needs of the population, displacement and injuries caused by fighting are likely to put additional pressure on the existing limited resources in hospitals,” Robert Onus, the MSF emergency manager for Syria, said.

Shelling has forced a main MSF-supported hospital in the Syrian border town of Tal Abyad to close as most of the medical staff left the area with their families, the charity says in a statement.

“As the only public hospital in the area, Tal Abyad hospital was critical to meeting the health needs of the town and surrounding areas,” it adds.

“I shared … my serious concerns about this ongoing operation and the risk of further destabilisation of the region,” Stoltenberg told reporters in Istanbul, speaking alongside Turkish Foreign Minister Mevlut Cavusoglu.

“While Turkey has serious security concerns, we expect Turkey to act with restraint.”

Stoltenberg also said the offensive should not undermine gains against ISIL.

“These gains must not be jeopardised. An imminent concern is that captured Daesh prisoners must not be allowed to escape,” he said, using the Arabic acronym for the ISIL.

The International Rescue Committee (IRC) aid organization said 64,000 people have reportedly fled their homes in northeast Syria, along the border with Turkey, and warned that the number could increase drastically. 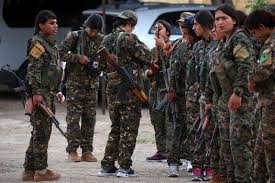 “If the offensive continues, it’s possible a total of 300,000 people could be displaced to already overstretched camps and towns still recovering from the fight against IS [ISIL],” communications director for IRC Misty Buswell said.

Human Rights Watch agreed, saying that while the extent of the Turkish military operation is not yet known, any major offensive is likely to displace thousands of more people, straining a humanitarian response that is already at its limits.

According to the UN, at least 700,000 of the 1.7 million people in northeast Syria need humanitarian assistance.

Buswell said the IRC teams “remain on the ground” and are “committed to supporting those newly displaced alongside people in the region who were already reliant on humanitarian aid”.

The Turkish defence ministry said 49 more “terrorists” were “neutralised” in the military operation, in reference to Syrian Kurdish fighters, putting the total number of Kurdish fighters killed since the offensive began at 277.

According to the Kurdish-led Syrian Democratic Forces (SDF), at least 16 of its members – along with six additional fighters of unknown identity – were confirmed killed, and another 33 wounded.

Turkey has reported the first death of one of its soldiers in its operation in northern Syria, during clashes with a Kurdish militia following a day of heaving shelling on both sides. 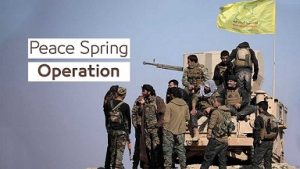 Three more soldiers were injured in the “operation region”, the defence ministry said in a statement after the clashes on Thursday, without giving further detail.

US President Donald Trump said mediating a deal between Turkey and the Kurds is one of the three options available to the US after Turkey’s offensive in northeast Syria.

“We have one of three choices: Send in thousands of troops and win Militarily, hit Turkey very hard Financially and with Sanctions, or mediate a deal between Turkey and the Kurds!” Trump said in a Twitter post.

The US will take action against Turkey if it engages in any “inhumane and disproportionate” moves against civilians during its incursion into northeast Syria, a senior State Department official said.

“That would include ethnic cleansing, it would include in particular indiscriminate artillery air and other fires directed at civilian population. That’s what we’re looking at right now. We haven’t seen significant examples of that so far,” the official said.