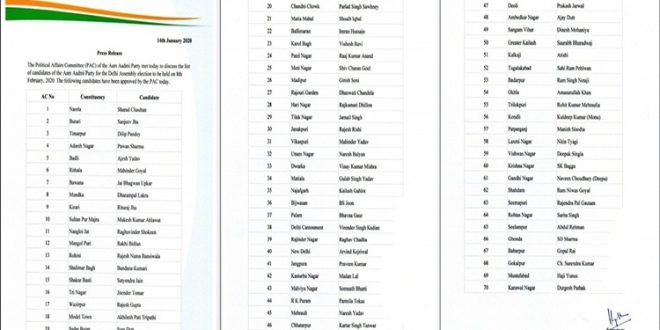 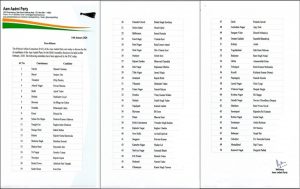 The process for filing nomination papers has begun for the upcoming Delhi Assembly Elections with the issuance of Notification today. Candidates can file their nominations till 21st of this month. scrutiny will take place the next day. The last date for withdrawal of papers is 24th January.

Polling for the 70-member Delhi Assembly will be held on 8th of next month and counting of votes will take place on 11th of February.

Meanwhile, the Aam Aadmi Party has announced names of candidates for all 70 seats.
A total of five nominations were filed today in three Assembly constituencies of Delhi on the first day of the filing of the nomination process.

Delhi Chief Minister and party convenor Arvind Kejriwal will contest from the New Delhi Assembly seat while his deputy Manish Sisodia from the Patparganj Assembly seat.

Ministers in Kejriwal Government Satyendra Jain will fight from Shakur Basti seat, Gopal Rai from Babarpur, Kailash Gahlot will contest from Najafgarh, Rajendra Pal Gautam has been fielded from Seemapuri and Imran Hussain will fight from Ballimaran. Delhi Assembly Speaker Ram Niwas Goel will contest from Shahdara. Bandana Kumari will fight from Shalimar Bagh. AAP’s Atishi, Raghav Chadha and Dilip Pandey, who unsuccessfully contested Lok Sabha polls are in the list of candidates for assembly elections. 46 sitting MLAs have been given tickets